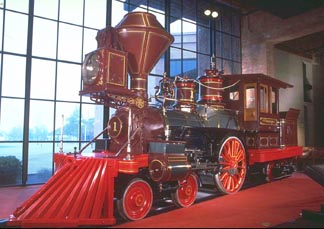 The C.P. Huntington was built for the Central Pacific Railroad by Danforth, Cooke & Company of Paterson, New Jersey in 1863. Shipped from New York around Cape Horn, it arrived in San Francisco, March 19, 1864. From 1894 on the Huntington became a symbol of Southern Pacific and was widely known from its many appearances in station openings and other railroad-related celebrations. Southern Pacific donated the engine to the State of California in 1964. The C. P. Huntington was placed on display at the old state fairgrounds on Stockton Boulevard, in Sacramento, where it remained until a 1970 refurbishing at Southern Pacific's Sacramento Shops. In 1979 it was placed in the Central Pacific Railroad Passenger Station in Old Sacramento, and in 1981 it was moved into the newly opened California State Railroad Museum.