The Livermores added to the company's assets some 9,000 acres of land that had been part of the Rancho de los Americanos in order to have river rights that would permit them to float logs down the stream. But to fulfill the elder Livermore's dream for developing the area, a dam above Folsom at Stony Bar gorge was needed to create a holding area for logs, provide water for factories, and store water to irrigate farmland.

Work on the dam began in 1867. The Natoma Company spent $119,000 in constructing a two-mile railroad from Folsom up to the damsite and in laying the foundation of the dam itself. 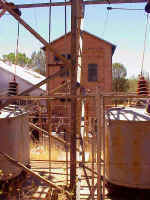 In order to minimize remaining construction costs, the Livermores in 1868 entered into a contract with the State Prison Board under which convict labor would be used to complete the dam. In exchange for the convicts' services, valued at $15,000, the Livermores were to turn over 350 acres of land on the east side of the river adjacent to the dam for the proposed Folsom Prison. Unfortunately for the determined Livermores, no convict labor would be available until the prison was built, so construction was not completed until 1880.

In 1881 the stockholders of the Natoma Water and Mining Company formed the Folsom Water Power Company to take over from Natoma all its properties and rights related to water power. The new organization demanded the prison labor due, and insisted on a more generous agreement providing for double payment in convict labor. The state sued and lost in an attempt to force the company to abide by its old offer and work on the dam was stopped. Under new agreement reached in 1888 the prison acquired the use of the railroad and enough "fall" from the powerhouse canal to operate a prison powerplant; in return the prison was to provide 60,000 man-days of convict labor annually for five years. The dam was at last completed in January 1893, one year after the death of Horatio Gates Livermore.