A more extensive celebration was held September 9, 1895 in conjunction with the annual State Fair and California Admission Day. The gala was dubbed a "Grand Electric Carnival," and indeed it was -- a night parade of illuminated floats mounted on electric streetcars rolled down streets ablaze with electric lights. The Capitol building itself was outlined by lights that could be seen for 50 miles.

By October 1895, the plant's four generators were producing 3,000 kilowatts to be used by the electric street railway and by industrial and commercial establishments. A fifth generator that boosted this to 3,750 kilowatts was eventually taken out of service. 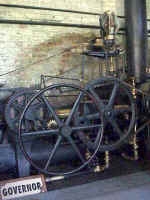 The powerhouse still looks much as it did in 1896 when the journal of Electricity described it: "Thoroughly fire-proof with walls of brick and stone, the floors are of concrete, on steel beams supporting terra cotta tile arches. All floors have wood surfacing. The roof is of iron." Folsom was now hailed as the "greatest operative electrical plant on the American continent". But there were problems. From 1896 to 1898 the waterflow in the river fell to unexpected lows during the dry season; the need for more electric power resources became acute. Sacramento Electric's increased business during this time made it necessary to construct an additional powerhouse in 1897 to produce more electricity by taking advantage of the 26-foot drop between the original powerhouse and the river. The turbine in this powerhouse was set low to get as much drop as possible, but the generator was set high to keep it safe from floods. A unique rope drive using 2,200 feet of continuous-strand hemp with a system of wheels and drums was created to connect them.

Consolidation of the related Livermore companies was accomplished in 1896 under the newly incorporated Sacramento Electric, Gas and Railway Company, and a bond issue of $1,500,000 was authorized. But the move failed to cure financial ills of the business or lessen the increasing pressure of competition from the well-established Capitol Gas Company and the newly formed Central California Electric Company.

By the turn of the century the financial picture improved for the company and business was expanding, but the struggle had been long and grueling for the Livermores and their associates. In 1903 the firm sold out to the California Gas and Electric Corporation, immediate predecessor of Pacific Gas and Electric which operated the powerhouse until November 1952. When the old dam was destroyed during the construction of the new Folsom Dam and the powerhouse was shut down after 57 years of continuous service. In 1958 PG&E presented the building to California State Parks for preservation and interpretation of its historic values.