Coalition members took emergency actions to treat 4,257 acres and plant more than 248,000 of native conifers throughout the giant sequoia range to begin to restore wildfire resilience for the iconic species. More action is needed. 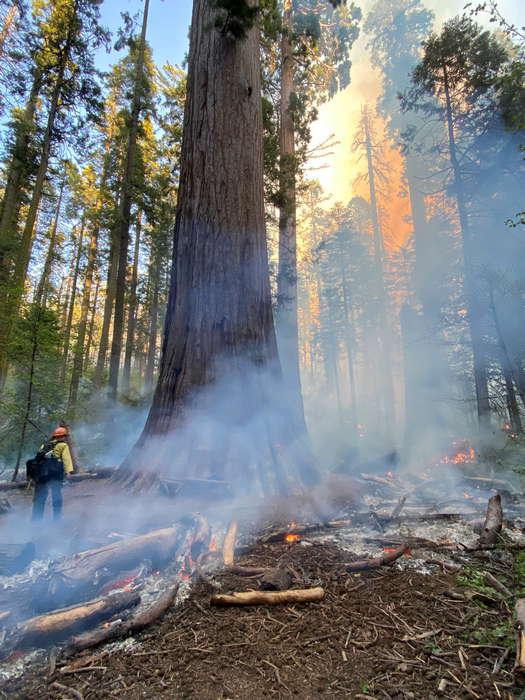 A prescribed burn clears dense understory fuels at Calaveras Big Trees State Park in May 2022. Photo courtesy of Save the Redwoods League.

ARNOLD, Calif. (Dec. 14, 2022) – Officials from the State of California, USDA Forest Service (Forest Service), National Parks Service (NPS), Tule River Indian Tribe of California and Save the Redwoods League - all members of the Giant Sequoia Lands Coalition - announced today that they have made significant progress to restore the giant sequoia range and help protect it from severe wildfires.

In its first year of large-scale collaboration, the Coalition far exceeded its goals, treating 4,257 acres - more than double the acres originally targeted for restoration in 2022 - in 36 of approximately 80 groves. Members also planted more than 248,000 native conifer seedlings, including giant sequoias, in groves that had burned in recent years.

The Coalition gathered at Calaveras Big Trees State Park today to issue a progress report on the work conducted throughout 2022 by the public and non-governmental organizations.

Giant sequoias are the largest trees in the world and severe wildfires have killed approximately 20% of the mature trees since 2015.

The two federal agencies that own and manage the majority of giant sequoia lands - USDA Forest Service and National Park Service - implemented emergency actions this summer to accelerate the pace and scale of work.

“An unprecedented crisis demands an unprecedented response,” said Jessica Morse, deputy secretary for forest and wildland resilience, California Natural Resources Agency, which houses the California State Parks system. “Federal, state, nonprofit and tribal partners have teamed up to protect critical old-growth giant sequoia groves. Unprecedented funding and a shift in government business practices – like deploying emergency authorities for the National Environmental Policy Act – have enabled us to scale and speed up crucial resilience projects. The loss of more than 10,000 giant sequoias is a somber testimony to the severity of the crisis. These resilience projects will make the difference between these monarch trees surviving or succumbing to the extreme climate pressures they face."

Additional highlights from the 2022 progress report include:

“How the giant sequoia species emerges from this existential threat will be determined by the choices that we make now. We, collectively, must take responsibility for what happens next,” said Sam Hodder, president and CEO of Save the Redwoods League. “We, again, urge decision makers to take further action to provide funding and personnel, enact policy changes and help us reduce fuels now so we can address the problem at scale.”

The members of the Giant Sequoia Lands Coalition are:

Note to media: Images of GSLC projects and places are available for download here.

About Giant Sequoia Lands Coalition
The Giant Sequoia Lands Coalition (GSLC) is a collaboration of public and non-governmental organizations with a shared commitment aimed at the conservation of giant sequoia grove ecosystems. The Coalition is comprised of all federal, tribal, state, local agencies and groups that manage giant sequoia groves in public, tribal or private non-profit ownership. Affiliate partners include select federal and state conservation agencies, non-governmental organization conservation groups and academic research partners with a shared commitment to protect giant sequoias and their ecosystems from emerging threats associated with climate change and the extended absence of natural, low-severity wildfire.  More information at giantsequoias.org.