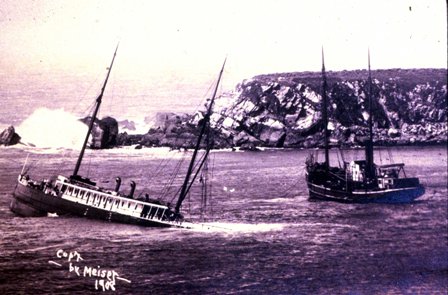 Although formal exploration has only recently begun, two basic types of cultural sites have been located in the underwater environment of California. They are Native American archaeological sites (and objects), and historic-era shipwrecks, cargo spills or landing sites.

Our state has a rich and varied maritime history. Native California peoples live in large settled villages along the Pacific coastline for many centuries before European contact. In some areas, such as along the Santa Barbara Channel and San Francisco Bay, these villages developed a highly sophisticated technology, with widespread trade using native watercraft. Boat construction reached its highest development in California among the Chumash. Their plank canoe, called a "tomol," impressed early explorers of the California coast for its versatility and seaworthiness. Recent dating of middens on San Clemente Island (some 60 miles offshore) has documented an ancient maritime culture dating back some 8.000 years, perhaps earlier. California coastal groups were technologically advanced and highly organized. Trading expeditions from the mainland were common to the Channel Islands to obtain steatite for soapstone bowls and effigy figurines. The remains of this prehistoric seafaring is being recorded by underwater archaeologists in quantities of artifacts recovered and preserved from the offshore areas. At least 25 individual sites have been reported between Ventura Beach and Point Conception. A recent exploration of Goleta State Beach yielded six stone bowls in one dive. Many other similar sites no doubt await discovery. 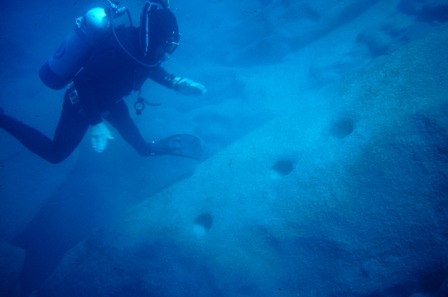 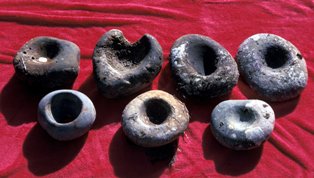 The rise in sea level over the past 10,000 years has resulted in submergence of many archaeological sites. One well known area at the edge of the La Jolla submarine canyon has yielded more than 2,000 stone bowls, from depths ranging up to 80 feet. This site is a submerged village, dated by archaeologists at 4,000 to 5,000 years old. A great deal of information on sea level changes and the ancient cultures that first colonized California can be learned at such sites.

The first recorded European vessels to visit California were Cabrillo’s caravels, Victoria and San Salvador, which cautiously made their way up the Pacific coast in 1542.  Twenty-three years later, the first galleon made a trans-Pacific crossing, and opened the Manila route to be followed for the next 250 years. California’s first recorded shipwreck is that of the San Augustin, which was driven ashore in 1595 at Drake’s Bay. Since then, thousands of vessels have been lost in our waters. These ships, their cargoes, and the mooring systems which restrained them are the physical remains of a rich maritime legacy in California.

Discovery of the remains of an 1850 Baltimore clipper has sparked tremendous interest in the early history of Mendocino county.  The Frolic, wrecked in a small cove near Caspar headlands, was carrying a cargo of trade goods to gold rush California. The artifacts provide a glimpse of the flurry of activity that brought people and goods from all over the world to the golden state. Silver tinder boxes, oyster shell window glass, and Chinese porcelains have been recovered and exhibited. The wreck site remains an impressive historical feature.  It has recently become leased to the California Department of Parks and Recreation. 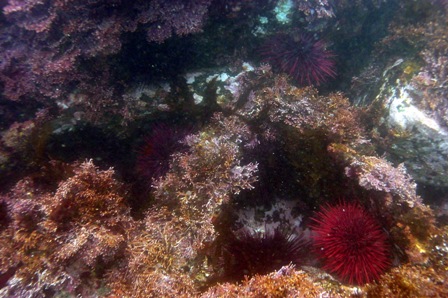 Gold rush shipwrecks have also been recently documented in the Sacramento River within the Old Sacramento SHP. The La Grange and Sterling, former sailing vessels that carried pioneers around the horn to the California gold fields in 1849, ended their days tied to the Sacramento levee. They sank into the mud only to reappear a century and a half later at the foot of the present flood wall. Examples of their timbers and contents have been preserved by underwater archaeologists.

Historic shipwreck sites, artifacts, and associated maritime features will be evaluated on an individual basis to determine their significance to California history. Important resources of statewide significance will be proposed for underwater park status in order to protect and interpret them. In this way, a record of California's maritime heritage can be made available for the enjoyment of present and future generations.