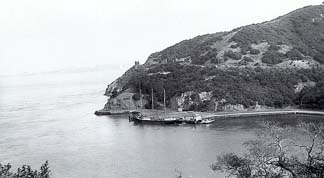 Native American use of the island began some two thousand or more years ago, when people began to live in the San Francisco Bay Area. Coast Miwok Indians, who lived in what is now Marin County, reached the island with boats made from tule reeds. Some of these boats could carry eight to ten people. Though they tended to become waterlogged after prolonged use, these boats were adequate for short trips because their lightness made them fast and maneuverable. Long poles were used to propel the boats in shallow water; double-ended paddles were used in deep water.

Miwok Indians established camps at what we know today as Ayala Cove, Camp Reynolds, Fort McDowell, and the Immigration Station. The Indians using the island were expert at fishing, and also hunted deer, seals, sea lions, and sea otter. Several kinds of fish and shellfish were available year-round, and salmon and other highly prized fish were seasonally plentiful. The annual spawning runs were made through Raccoon Strait just offshore from Angel Island. The Indians also hunted ducks and other sea fowl, and gathered acorns, buckeyes, and other seed crops, as well certain roots and leaves, in order to round out their varied diet.