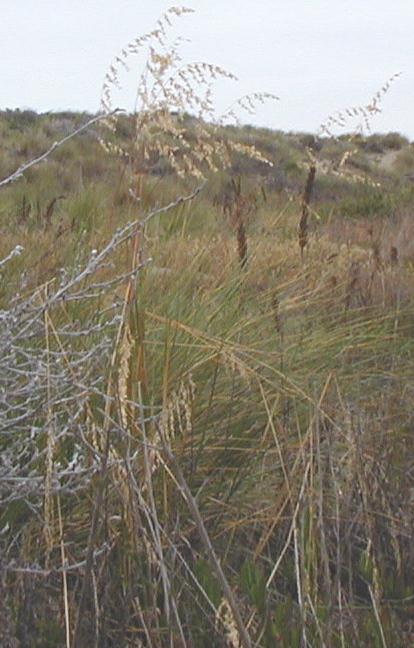 Veldt grass (Ehrharta calycina), a bunchgrass native to South Africa, was introduced to California in the 1940's as a range improvement crop. Since that time, it has spread perniciously along the central coast of California. Currently, Veldt grass populations dominate large areas of central coast dune systems, disrupting ecosytem function and greatly reducing biodiversity.

Veldt has become a significant problem in the south Morro Bay area and Montana De Oro State Park. California Conservation Corps and District staff completed a survey of the veldt grass within the dune system at MDOSP. (See map)

Although Veldt grass appears to occur most prominently in disturbed areas, such as previously cultivated sites, the species can also invade undisturbed native habitat. Only a few codominant species, such as dune lupine (Lupinus chammisonis) and mock heather (Ericamaria ericoides), can compete within a heavily invaded area.

Due to the severity of the problem at Montana De Oro, the main focus of park staff is to stop the Veldt grass from spreading and to control it in areas where the invasion is still manageable (e.g., Shark's Inlet). This makes identifying and eliminating new pockets of veldt grass of great importance. In 2001 and again in 2002, a small patch of Veldt grass was discovered at Morro Strand State Beach — an area where veldt grass had not been found before. It has also now been discovered in small pockets on the sandspit at Montana de Oro SP. Such new infestations will be a high priority as removal efforts continue.