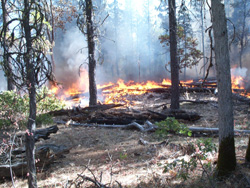 The combination of available wood; warm, dry summers; and ignition sources (lightning and human caused) means that for most years, wildland fires of all intensities occur in Northeastern California.  Fire releases the nutrients bound in this organic matter to the air and soil.  Indeed, the plants and animals of the pine/oak and mixed-conifer forests have evolved unique characteristics and behaviors to survive fire, to avoid fire, or to exploit the nutrient rich microenvironment after fire.

The Department has managed the property around Burney Falls for 8 decades. Until recently, the management philosophy was one of conservation/protection, which included the suppression of all wildland fires.  By the late 1970s, the living and dead biomass had increased on each acre of wildland (i.e., more trees, larger tree size, and more dead standing and downed wood).  Most of the new trees are Douglas-fir, incense cedar, and a few white fir that are able to reproduce and grow under the shade of the dominant pines and oaks.

Recent Changes at the Park 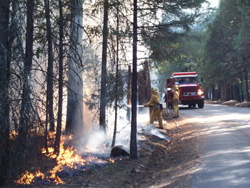 The multi-year droughts of the 1970s and 1980s, caused severe water stress in the living trees.  Subsequently, the native bark beetles, began to attack the stressed pines resulting in a massive pine death throughout the region. The Department responded by removing several thousand dead pines and conducted a 17-acre prescribed burn in the 1980s.

Recently. the Department began a sustained prescribed burning program by applying low to moderate intensity understory burns to 51 acres in 2001, 11 acres in 2003, and 32 acres in 2005 (see map).  The burns Increased the plant and animal biodiversity through the: 1) creation of new snags and new downed logs; 2) consumption of accumulated litter/duff thus recycling nutrients and producing new mineral soil seed bed for pines, junipers and oaks; 3) creation of openings in the forest canopy which improve the survival of pine, juniper and oak seedlings/saplings; and 4) elimination of seedling/sapling sized fir and cedar which compete with the pine, oak and juniper. 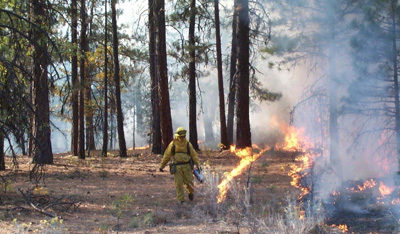 Despite these efforts, many areas of the park still have high tree densities and fuel loads.  Our goal is to avoid both insect epidemics and extreme wildfires such as the Fountain Fire which threatened the town of Burney.  This wildfire consumed 63,960 acres and destroyed 636 structures in just 33 hours.

The Department will continue to use a combination of wood removal and understory prescription burning.  This will not prevent all bark beetle attacks, but it will discourage epidemics.  It will not prevent extreme fires from entering the park, but it will dramatically reduce damage to park facilities and natural and cultural resources when such an incident occurs.

The Department plans to burn 9 forest understory plots on the west side of Burney Creek (see map).  This will be a cooperative effort with the California Department of Forestry and Fire Protection and the Intermountain Conservation Camp.  Each of the burn plots will be ignited on a weekday between the hours of 11 a.m. and 5 p.m. in order to reduce the amount of smoke.