ARNOLD, Calif. — This past Saturday at Calaveras Big Trees State Park, California State Parks and partners reopened the Three Senses Trail during a re-commissioning ceremony. Ryder Sitch and his mother Yvonne cut the ribbon to reopen the trail. Ryder, who is visually impaired, helped with the trail development and interpretive components.

Initially referred to as the “Braille Trail,” the trail was created in 1974 for blind and visually impaired visitors to fully experience the Giant Sequoia forest and became a popular teaching trail for children’s school tours. During the past four months, State Parks along with the Arnold Lions Club and the Calaveras Big Trees Association (CBTA) revamped the trail to improve access for visitors.

Principal funding for this project was provided by the Lions Clubs International Foundation and the District 4-A1 Lions Club, grants from the Calaveras Community Foundation and Sierra Pacific Industries, along with contributions from many friends and supporters of Calaveras Big Trees State Park. Construction involved park maintenance staff, park docent volunteers, the California Conservation Corp and inmates from the California Department of Corrections and Rehabilitation.

The full rehabilitation of the trail is planned for the spring of 2019 when the “Touching Garden” is finished. Guided tours are set to start next year.

Calaveras Big Trees State Park became a state park in 1931 to preserve the North Grove of giant sequoias. This grove includes the "Discovery Tree", also known as the "Big Stump", the first Sierra redwood noted by Augustus T. Dowd in 1852. This area has been a major tourist attraction ever since, and is considered the longest continuously operated tourist facility in California. Over the years, other parcels of mixed conifer forests have been added to the park. This amazing park has a huge variety of habitats and recreational opportunities to explore. 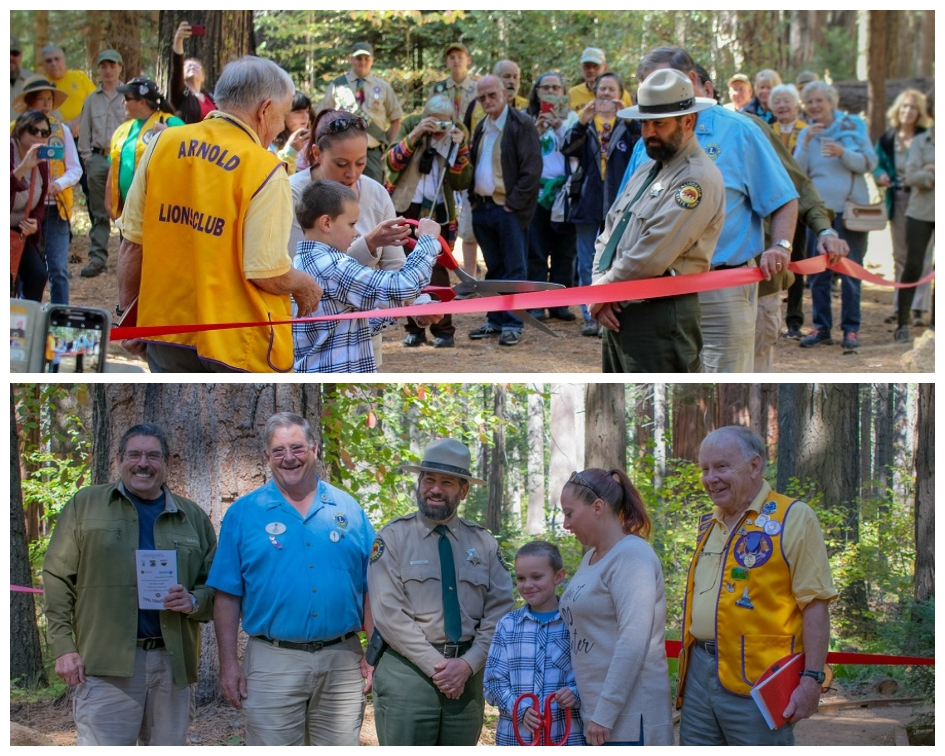 Top: Ryder Sitch and his mother Yvonne get ready to cut the ribbon to reopen the Three Senses Trail. Ryder, who is visually impaired, helped with the trail development and interpretive components.