In 1897, San Francisco businessman I. W. Hellman began buying property at Sugar Pine Point and by 1913 had acquired nearly 2000 acres. His grand but informal summer home, called Pine Lodge, was completed in 1903 and was considered to be one of the finest in the high Sierra. His daughter, Florence Hellman Ehrman inherited the estate and she and her husband Sydney spent many summers here entertaining family and friends.

The building site was originally a sand hill. Tons of topsoil were brought from the back country to provide the base for lawns and gardens. Most of the building materials for the house were obtained locally; the granite from Meeks Bay and the lumber from Hobart Mills, north of Truckee.

The house, designed by Walter Danforth Bliss, was equipped with the best and most modern utility systems including electric lights and complete indoor plumbing. Steam generators produced electricity until commercial power was available in 1927. Water was obtained from General Creek and later pumped directly from the Lake.

Comfortable wicker lounge furniture and a billiard table were to be found on the porch. The north stone room was used for luncheons and furnished with an oak dining set. The south stone room was a game room and displayed the family's collection of Indian baskets and Navajo rugs.

The wing to the northwest contains the kitchen, pantry and staff dining room. Two full time cooks and several helpers were employed to prepare meals for the family, their numerous guests and a live-in staff of twenty-seven. Wood stoves and an ice box were used in the kitchen until 1945 when a large commercial gas range and refrigerator were installed.

The spiral staircase rises to the second floor where a hall runs north and south joining the eight bedrooms and seven bathrooms. The family and guests would stay here in rooms furnished simply with brass beds and Navajo rugs. The wing over the kitchen contained a sewing room, linen closet and storage rooms. A back staircase leads to the 3rd floor staff quarters consisting of four bedrooms, one bath and many storage closets.

In 1965 the house and 1,975 acres of the estate were acquired by the California State Park System. Today the house is maintained as a house museum and as an example of the opulent tradition in Tahoe summer homes. 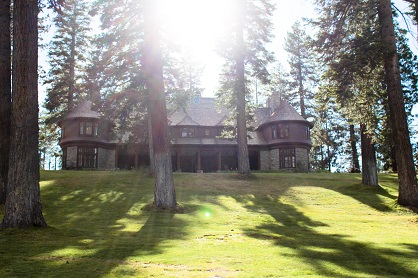 PRIVATE TOURS: Private group tours can be arranged by calling the Sierra State Park Foundation office at 530.583.9911 or info@sierrastateparks.org.

SCHOOL GROUP TOURS: Field trips for K-12 public schools are FREE! Reach out to kaytlen.jackson@parks.ca.gov or call 530-489-8909 for more information.