The diverse terrain of ridges, canyons and rock outcrops houses several varieties of habitats within the park's environs. There are two seasonally intermittent streams whose flows-at times significant enough to produce waterfalls-depend on the rainfall. The presence or absence of springs and streams at different times of the year has a profound effect on the local vegetation. The landscape of this park consists of sandstone ramparts-relics of mountain-building forces exerted nearly five million years ago. These memorable formations have been used as the background for several western films. 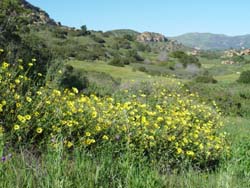 The soil, which ranges from hard sandstone bedrock to various forms of the surrounding clay, shale and crushed sandstone, provides a perfect habitat for the abundant coastal sage scrub, chaparral and annual grasses among smaller areas of oak and riparian woodlands and riparian scrub. The sandstone rock outcrops shelter the rare Santa Susana tarplant, while the moister north-facing slopes support more dense vegetation. Coastal sagebrush, buckwheat, laurel sumac, chamise and wild lilac are typical shrubs within the park environs. In the small canyons, where seasonal rains are more likely to be channeled, some riparian species such as willow and Mexican elderberry grow well. In the larger riparian channels, coast live oak, California walnut, sycamores and willows create a dense canopy. Spring rains produce acres of spectacular flowers and blooming shrubs.

Because of its greatly diverse plant communities, the availability of water, and a varied physical structure, this region supports a rich variety of wildlife. This rugged area is part of an important wildlife corridor that connects the San Gabriel, Santa Susana and Santa Monica Mountain ranges. Mule deer, bobcats, coyotes, gray foxes and ring-tailed cats are among the many native animals to be found here.

Two distinct California Indian groups were the primary dwellers of this area: the Tongva and the Chumash. It is not known whether the area was equally shared by the two groups, or whether one was dominant. The Tongva people, highly proficient at deep-sea fishing, shellfish gathering and hunting sea mammals, were especially skilled at trading with their neighboring groups-with shell beads, steatite, dried fish and sea otter pelts among their trade items. The Chumash people were technologically and artistically sophisticated, creating fine basketry, canoes capable of sea voyages and spectacular rock art. Today, descendents of the Chumash and Tongva people have maintained the traditions of their ancestors through community outreach and educational interpretive programs.

The Santa Susana Mountains and the San Fernando Valley have a history as a transportation corridor that dates back to 1769, when Spanish Army Captain Gaspar de Portola led an expedition over the Sepulveda Pass from San Diego to Monterey Bay. During the next 52 years, the Spanish rulers established presidios, towns and a system of 21 missions.  The route of travel between the missions was known as El Camino Real (the King's Highway). Today, the Simi Valley Freeway-also known as State Highway 118-follows the 1895 route built to ease the grade of the old road over the Santa Susana Pass.