The park is three miles north of Fort Bragg on Highway 1. From the intersection of Mill Creek Dr (Cleone Heights Dr) & Hwy 1, proceed W toward park entrance. The park includes land W of Cleone and a strip of beach between Fort Bragg and Ten Mile River.


For these reasons State Park units in the Sonoma-Mendocino Coat District do not allow launching, landing or the operation of drones on State Park property.
Camper Information

MacKerricher State Park offers a variety of habitats; beach, bluff, headland, dune, forest and wetland. Tide pools are along the shore. Seals may be seen on the rocks off the park's coastline. More than 90 species of birds visit or live near Cleone Lake, a former tidal lagoon. During winter and spring, the nearby headland provides a good lookout for whale watching. The park is popular with hikers, joggers, equestrians and bicyclists. The park has a wheelchair accessible nature trail. 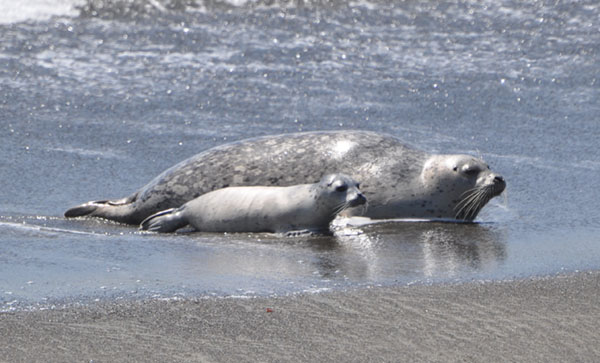 Location/Directions
The park is three miles north of Fort Bragg on Highway 1, near the town of Cleone. The park encompasses much of the land west of Cleone and a strip of beach between Fort Bragg and Ten Mile River.

About the Park
The park is the only one in the park system that was at one time part of the Mendocino Indian Reservation.

It is the only park unit that was part of the Union Lumber Company's vast timber and shipping holdings in northern Mendocino County. A small, independent logging and shipping operation began here, and then was absorbed by the larger corporation. MacKerricher, known historically as Cleone, thus followed a pattern common to many of the small areas in the region. The park was officially opened in 1952; land was added along the Ten Mile beach until 1977.

Accessibility
Several accessible facilities at MacKerricher include a boardwalk at Laguna Point and Haul Road.
Assistance may be needed with restroom, shower, and other facilities. A beach wheelchair is available for use by calling (707) 937-5721 to reserve it at least seven days in advance. Accessibility at the park is continually improving.  For updates on accessibility in any California state park, click the Accessible Features link at the top of this page.

The restoration work planned for the Ten Mile Dunes area is to remove 2.7 miles of remnant haul road, remove two culverts and to hand-pull European beach grass. Both the road and the non-native invasive beach grass continue to degrade natural processes and habitat that are critical to the imperiled plant and wildlife species found there.

MacKerricher State Park
The Ten Mile Dunes complex at MacKerricher State Park contains a unique, relatively pristine native dune and wetland ecosystem. The effects of climate change over the past several thousand years have been recorded by sediment deposits along the coast. Recurrent periods of dune formation and sea level oscillation have been associated with the Ice Ages and more recent climatic events. These shifting sands of time produced enclosed areas of water ponding that became vegetative microclimates such as Inglenook Fen and Sandhill Lake.

Schedule an In Park Field Trip

Look for Whales at MacKerricher

A beach wheelchair, free of charge, is available upon request for use at California State Park beaches in the Mendocino coast area. Call (707) 937-5721 at least 7 days in advance to reserve the beach wheelchair. Please note the wheelchair does not fold up and you will need a truck or SUV to transport the wheelchair from the kiosk or Visitor Center to the beach.