Located along 2 miles of coastline between the cities of Ventura and Oxnard in Ventura County, McGrath State Beach (SB) provides a variety of outdoor recreational opportunities such as camping, hiking, bird-watching and fishing. Its existing campground dates back to 1964, soon after McGrath SB was established. McGrath’s State Beach classification designates it as a coastal area, allowing for beach-oriented recreational activities, including surfing and swimming.

The wetlands, riparian forest and dunes at McGrath SB, including the Santa Clara River Estuary, provide habitats for a number of native and sensitive species, including two fish (the Southern California steelhead and the tidewater goby) and two birds (the California least tern and the western snowy plover). Unfortunately, the estuary currently provides low-quality habitat for the native wildlife.

Additionally, a lagoon naturally forms in the Santa Clara River Estuary during low river flows due to the establishment of a sand bar at the mouth of the river. This prevents the river from reaching the ocean and the waters back up into the estuary. As the water backs up, it floods the northern portion of the campground and associated park facilities, and often remains flooded for months. A levee constructed in the 1950s provided some protection for the campground facilities over the years. However, a storm event in 1998 substantially damaged the levee; another storm event in 2005 led to its complete failure.

In August 2014, McGrath SB closed due to chronic flooding and damage to facilities. During this time, a feasibility study to address estuary habitat improvements was conducted with public and regulatory agency participation. To facilitate the estuary restoration, the study proposed relocating public-use facilities within McGrath SB. California State Parks has worked to keep as much of the campground open as possible, but since 2017, only about one-third of the campground’s 174 sites have been available, and only on a limited basis.

The proposed project aims to both restore the Santa Clara River Estuary wetlands and reestablish public access at McGrath SB by balancing habitat restoration efforts with new park facilities that support recreation and outdoor education opportunities. As a result, McGrath SB will offer enhanced wildlife habitat, improve the quality and availability of public access, and ensure resilience of park facilities to flooding. 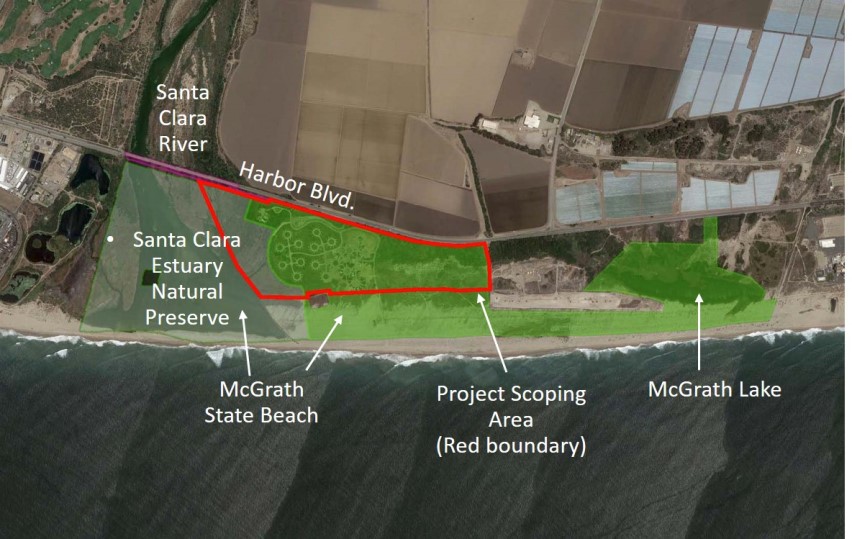 The planning phase for this proposed project will involve considerable engagement with multiple regulatory agencies and will provide opportunities for public input as design concepts are developed and refined.

The project goals are twofold: The first goal is the restoration and enhancement of the Santa Clara River Estuary wetlands, which will provide more suitable habitat for a variety of species found at McGrath State Beach. The second goal is to improve public access to this valuable resource by reestablishing year-round recreational access to park facilities that support day use, overnight camping and other recreational opportunities for park visitors.

California State Parks recognizes its special responsibility as the steward of many sites of cultural and spiritual significance to living Native Peoples of California. Consultation is ongoing with local Native American representatives to seek their input on interpretation of their culture and to protect Tribal resources.

California State Parks is in the early stages of planning and designing for proposed restoration and enhancement of the Santa Clara River Estuary wetlands within McGrath State Beach. To achieve the restoration goals, the project will relocate a portion of the existing campground––including campsites, day-use areas, restrooms and other public-use facilities––to allow for expansion of the wetlands. The relocation of these facilities will not only allow for a larger, enhanced estuary habitat, it will also replace aging infrastructure with new facilities designed for flood resistance and to enhance the visitor experience for campers and other recreational users.

Next steps for the project include public stakeholder engagement and the development of a conceptual design to support completion of California Environmental Quality Act (CEQA) requirements and related environmental documents. With regulatory approvals, California State Parks anticipates funding to become available to complete the design and construction of both the estuary restoration and the improved public-use facilities.