PLANTS
Kruse Rhododendron State Natural Reserve is known for second-growth redwoods, Douglas-firs, grand firs, tanoaks, and abundant rhododendrons. In late spring, the rhododendrons burst into bloom and color the deep green of the forest with brilliant pink blossoms. The species, Rhododendron macrophyllum (more commonly known as California rose bay or the Pacific or coast or big leaf rhododendron), grows up to 30 feet tall and is native to the North American coast, from British Columbia to Monterey County. Other plants carpeting the ground beneath Kruse’s tall trees include salal, Pacific wax myrtle, and California huckleberry.

ECOLOGY
Why are there so many rhododendrons here? They were early colonizers following a severe fire. Then, hardwoods, such as tanoak and California bay laurel appeared, followed by conifers—Douglas-firs, grand firs, and redwoods. Each of these species competes for sunlight, water, and nutrients. The best-suited plants dominate the environment until they create conditions more conducive to the success of other species in a process called “plant succession.” 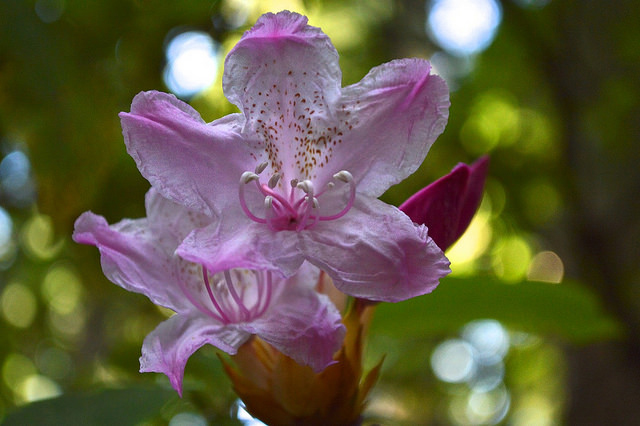 If normal plant succession had taken place, splendid annual rhododendron displays might have faded by now. In fact, in 1979, few rhododendrons bloomed, and those that did were well above eye level. Tanoaks were crowding in, taking a greater share of space and sunlight. Some of the pink-flowered plants died out; others grew elongated stems. That fall, the State Parks staff began a rejuvenation program involving judicious thinning and pruning. By 1984, the floral splendor was back.