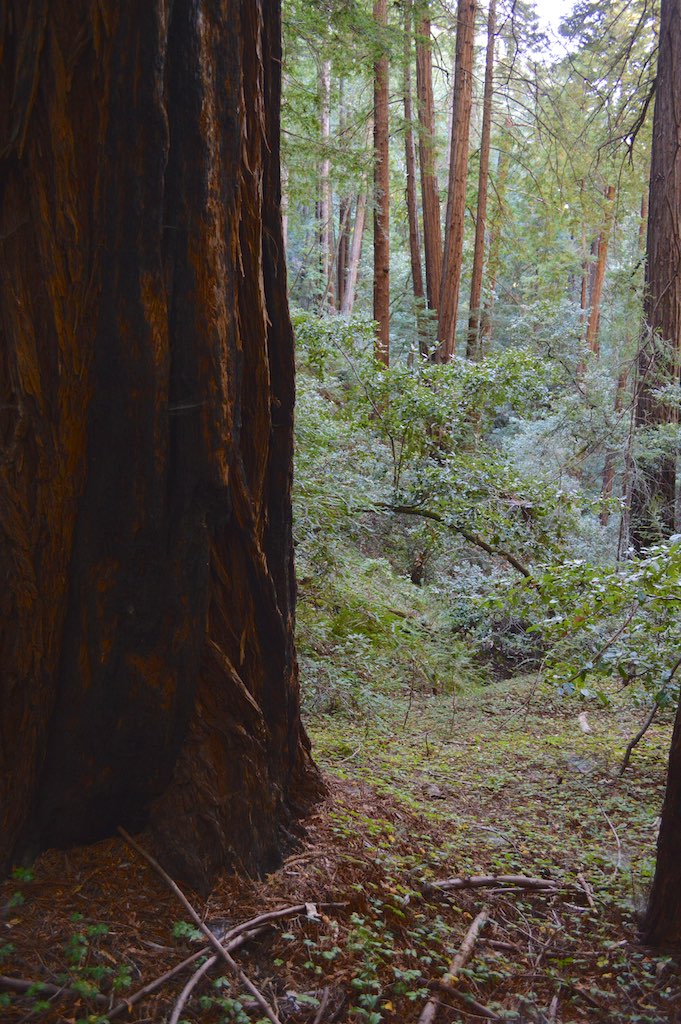 Much of the interior of Little Butano Canyon is dominated by a mixture of old-growth and second-growth coast redwoods and mossy Douglas-firs. Huckleberry bushes top the stumps of fallen redwoods. Western wake-robin and false Solomon’s seal bloom at ankle height. Purple calypso orchids bloom from February to April.

Redwoods hollowed out by ancient forest fires provide homes for bats. In wet weather, watch out for newts and banana slugs along the trails. You might hear Pacific wrens, nearly invisible until their resonant songs give away their locations among the logs and stumps.

The entrance to the park is grassland. Many of the grasses are non-native European species, but there are many native plants here, too, such as coyote brush, yellow bush lupine, blue-eyed grass, and horsetails.
Watch for deer foraging in the grassland during the early morning and evening, which is also a good time to watch predators such as coyotes, bobcats, and red-tailed hawks hunting for rodents and other small prey.

The first half-mile of Little Butano Creek is shaded by alders. Under their canopy, blackberries, stinging ,nettles, elderberries, dogwoods, and willows provide food and shelter for insects, small mammals, reptiles and a variety of birds. Trout, crayfish, and endangered red-legged frogs live in and around the creek. Look for flowering currants, twinberries, thimbleberries, salmonberries, osoberries, gooseberries, and baneberries. (Berry plants may not be picked.)

On the side of the canyon above the park entrance, grasslands give way to live oaks. When it rains, bright orange chanterelle mushrooms sprout from the decayed oak tree litter. (Mushroom collecting is not allowed in Butano State Park.) The duff provides a garden bed for honeysuckle, coffeeberry, blackberry, and poison oak. Look for arboreal salamanders on the ground and chickadees and warblers overhead.

Two species of live oaks inhabit the park: coast live oak and interior live oak. These evergreen trees are similar in appearance and have holly-shaped leaves. Leaves of the coast live oak are convex and have tiny tufts of hair on the underside, where side veins branch off of the mid-rib. Leaves of the interior live oak are flatter and lack tufts of hair on the underside. Sometimes the two species hybridize, making identification difficult.

At Jackson Flats on the north side of the canyon and at Goat Hill on the south, the forest opens up into mountainside marshes. The marshy terraces may be the heads of ancient landslides—the work of earthquakes along the San Gregorio fault. The marshes dry up in summer, yet they are vital to wildlife that breed in winter. Pacific tree frogs and California newts swim among the cattails; giant skunk cabbages and other water-loving plants thrive.

On the ridge tops, softer soils turn into the chalky gravel of Santa Margarita sandstone, and tall firs and redwoods give way to shrubby, sap-encrusted knobcone pines, scrub oaks, manzanitas and chinquapins. Quick-moving western fence lizards scramble underfoot, and rattlesnakes may be encountered. The fragrance of the chaparral and the sight of blooming ceanothus, monkey flower and Indian paintbrush are well worth a summer hike.

The knobcone pines have adapted to survive where soil is thin and low in nutrients and where moisture is scarce during the long, dry summer. Look for them along the Butano Fire Road near the abandoned landing field.

Although bobcats are common in the Santa Cruz Mountains, they are seldom seen. They avoid people and, when still, their mottled coat provides camouflage. The best time to catch a glimpse of one is just after dawn or before dusk when they do much of their hunting. Sometimes a bobcat will be seen dashing across a road at night. Gophers live underground in burrows that they excavate with their sharp claws. They feed mostly on plant roots but sometimes also pull stems and leaves into their burrows. Gopher snakes eat small mammals such as gophers, moles, and mice. They are not poisonous or harmful to humans.

The dusky-footed woodrat is known for its houses, a pile of sticks and other materials that led to its nickname: “packrat.” Houses used by several generations can reach several feet in height. Woodrats are most active at night and eat acorns, seeds, leaves, roots, and fruits. Their houses also provide shelter for lizards, salamanders, slugs, snails and insects.

Ringtails are close relatives of the raccoon. The size of the population is difficult to estimate since they are so secretive, but they are known to reside in the park. Ringtails are most active in the middle of the night, when they search for rodents and other small prey. During the day, they hide in rocky crevices or hollow trees.

The hoary bat is one of the largest of the several bat species that live in the Santa Cruz Mountains. It hangs in a tree during the day and takes flight at dusk, swooping about the open forest, catching small insects. It is harmless to humans and plays a vital role in controlling mosquitos. Some bats can consume hundreds of insects in just one hour.

Butano State Park is defined by the watershed of Little Butano Creek. Within the canyon are a number of overlapping plant communities that support the birds listed here. The best opportunities to view birds are provided by the narrow strip of alder and willow woodland along the creek at the mouth of the canyon.
Neotropical migrants (birds that migrate between the Americas) such as the Swainson thrushes, are commonly heard here in the spring, as are the colorful black-headed grosbeaks and Wilson's warblers.

The deep woods around the campground are good places to hear band-tailed pigeons, varied thrushes, pileated woodpeckers, and marbled murrelets. The dark blue, black-crested Steller's jays will beg for food wherever humans congregate--please don't feed them or leave crumbs about. Jays, crows and ravens (corvids) attracted to campsite tidbits will then eat endangered marbled murrelet eggs and chicks in their nests high in the redwood canopy.

Townsend's warblers and chestnut-backed chickadees are common in the mixed evergreen forest on the canyon sides, while wrentits, brown towhees, sparrows, and California quail are frequently found in the grassland scrub at the park entrance. Hummingbirds are springtime visitors to the chaparral on the ridgetops.
Hawks can be seen soaring among the treetops high above the Visitor Center; owls can be heard at night. Brown creepers cling to the tree trunks, and the small brown Pacific wrens flit among the stumps and ferns.

For more natural history information, consult Plants and Plant Communities of the San Mateo Coast, which is available in San Mateo Coast State Park bookstores. The book can also be purchased online at the California State Parks Foundation bookstore. Several of the park’s most common plants and birds are identified with photographs on Butano State Park's blog.

In a time of climate change, redwoods are an asset. Their size and longevity help them store more climate-altering carbon dioxide than other plants. Even old redwoods continue to grow, each year adding more carbon-filled wood than smaller, younger trees. After redwoods die, their rot-resistant wood keeps that carbon out of the atmosphere for a long time.