We want to hear from you!

Folsom Lake SRA is seeking public input on the proposed Browns Ravine Trail Change-in-Use (CIU) project. This project proposes to change the trail’s use designation from hiking and equestrian to multi-use, adding bikes as an allowed use on the trail.

Let your voice be heard by taking advantage of the following opportunities to provide public comment:

Additional details concerning this project are provided in the sections below. 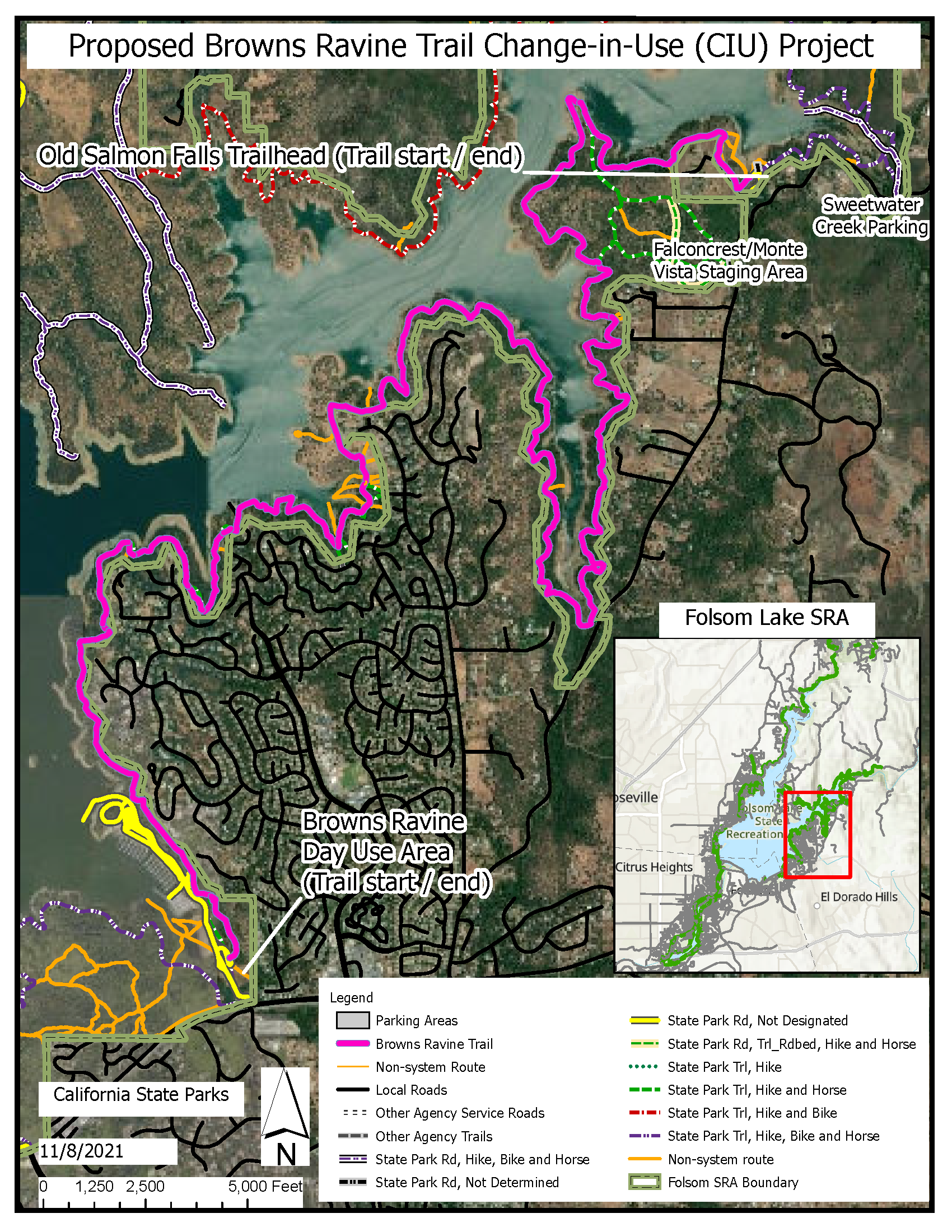 The Browns Ravine Trail Change-in-Use (CIU) project proposes to change the trail’s use designation to multi-use. In addition to hiking and equestrian uses, the multi-use trail designation would allow bicycles on this trail. This proposed CIU is moving forward as a stand-alone project, separate from the concurrent Folsom Area State Parks Road and Trails Management Plan.

The final decision concerning the Browns Ravine Trail CIU project will be made by the Gold Fields District Superintendent following consideration of public input.

Efforts to change the use designation of the Browns Ravine Trail from hiking and equestrian to multi-use date back to 2000. In June of that year, the Folsom Lake Trails Advocacy Group (FTAG) was formed with the goal of increasing safe trail access and reducing conflicts among trail user groups.

FTAG eventually proposed a one-year pilot program that aimed to determine whether a trail within Folsom Lake SRA (FLSRA) could be successfully converted from hiking and equestrian to multi-use. The Browns Ravine Trail was selected due to its relatively gentle terrain and light use, and that the trail could be readily modified for the proposed change-in-use.

FTAG proposed that following necessary modifications, the change-in-use designation was to be implemented, monitored and evaluated for a period of one-year. At the conclusion of the one-year pilot program, the District Superintendent would determine whether to make the change-in-use permanent.

A team of state parks trail specialists and FTAG members conducted an on-the-ground assessment of the entirety of the Browns Ravine Trail. They identified a number of modifications and management actions needed to successfully implement the proposed pilot program conversion. These included trail re-routes and repairs, new signage, trail patrols and a public education campaign. Additionally, the team held two public meetings in 2001, presenting the proposal to and gathering input from the public.

In 2002, FTAG recommended to the Gold Fields District Superintendent that the one-year pilot program be implemented. The Superintendent ultimately decided to postpone the decision until completion of the FLSRA General Plan, which had just been initiated.

The FLSRA General Plan was approved in 2009. Though it did not specifically recommend a change-in-use for the Browns Ravine Trail, it did identify a number of trail-related proposals, including the development and implementation of a “Trails Master Plan.”

Concurrently, the department had begun initiating the development of a formal Change-in-Use (CIU) process and had also identified the purpose and content of long-term Road and Trail Management Plans (RTMP).

The Folsom Area State Parks Road and Trails Management Plan (RTMP) was initiated in 2012. State Parks recently brought on a consultant team, Placeworks Inc, to assist with the completion of the RTMP.

The Browns Ravine Trail CIU is moving forward as a stand-alone project, separate from the Folsom Area State Parks RTMP.

As a result, requests to evaluate changes-in-use on nearly all trails within Folsom Lake SRA where bike use was not allowed were received. In response, parks staff formed a District CIU Team, which assessed all trails where a CIU was requested, including the Browns Ravine Trail, using the Department’s seven-point CIU evaluation form.

State Parks has decided to move forward with a decision on a CIU for the Browns Ravine Trail as a stand-alone project, separate from the RTMP, for the following reasons:

If approved, the stand-alone CIU decision will allow State Parks to implement the Browns Ravine CIU ahead of the RTMP.

Developed by State Parks in 2008, the Change-in-Use (CIU) process is used to facilitate the review of CIU proposals that would add uses to or remove uses from existing recreational roads and trails within the state park system.

Review the CIU Process Flow Chart with this document.

Additional information concerning the CIU process can be found on this page.

A multi-disciplinary team of natural and cultural resources, planning, public safety and trail specialists from California State Parks’ Gold Fields District has evaluated the Browns Ravine Trail CIU and the completed evaluation can be found here.

The CIU Evaluation Form assesses the feasibility of proposed changes-in-use by focusing on seven key areas:

The Gold Fields District CIU Team recommends approving the proposed Browns Ravine Trail CIU with trail design and management modifications, which are detailed in the section below. The purpose of the modifications is to help ensure that the trail is safe and sustainable.

The CIU evaluation noted that portions of the Browns Ravine Trail, which generally features sustainable grades and good lines of sight, are used regularly by mountain bikers. The proposed CIU would enhance trail access and circulation for bikes.

Trail modifications proposed by the Gold Fields District CIU Team include trail reroutes, the reconstruction of trail segments and bridges, the repair and or installation of drainage features and additional trail modifications. These proposed modifications, which prioritize trail safety and sustainability, have been identified and mapped.

High-priority modifications, such as reroutes, aim to repair unsustainable trail segments that drain directly into streams and drainages. These modifications would need to be implemented prior to opening the Browns Ravine Trail to bikes.

Site specific environmental analysis of the proposed modifications would be completed prior to implementation.

Sign up to receive email updates about the Browns Ravine Trail CIU project.