Trails from the Marine Education Center

Near the main parking lot of Año Nuevo State Park visitors will find the Año Nuevo Point Trail that leads out to the Natural Preserve as well as other trails that explore the park.

This trail does far more than get you to the elephant seal viewing areas in Año Nuevo State Park's natural preserve (which you can access only by guided tour or permit). The 0.8 mile/1.2 km path to the preserve boundary takes you through thousands of years of both human history and geologic time.

The trail begins near the Marine Education Center and theater, respectively housed in the cattle barn and horse barn of the Steele Ranch. The Dickerman and Steele families oversaw a successful dairy operation on these lands from the 1860s to the 1950s. Since the Steele family turned these lands over to California State Parks, native shrubs such as coyote bush and toyon and native trees such as Monterey pine and Douglas fir have started to creep back into the former pastures along your path.

Beyond the junction with the New Years Creek Trail, the Año Nuevo Point Trail runs along the top of an earthen dam, which has inadvertently created precious habitat for endangered species. The red-legged frog and its predator, the San Francisco garter snake, both take refuge around the soggy edges of the pond.

A short spur from the pond drops down to the world-class surf break at Cove Beach, visited by sea birds, shorebirds, and occasionally elephant seals.

The trail climbs up through a stand of Monterey pines as you cross over the Frijoles fault, just past the pond. Thousands of earthquakes over thousands of years have thrust up the land west of the fault, but it will take you only a minute or two to resume easy walking on a flat terrace carved by surf about 80,000 years ago, about 20,000 years younger than the terrace at the start of the trail.

The next stand of Monterey pines shelters the staging area at the boundary of the natural preserve. The preserve itself is only accessible via permit or guided tour, but the pit toilets to the right of the gate and the coastal overlook to the left remain available to all trail users. 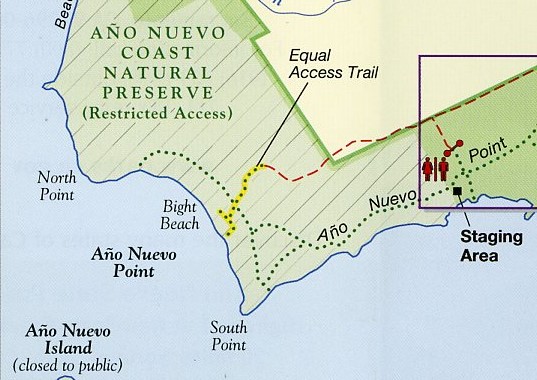 work a bit differently beyond the gate at the staging area. Guided tours provide the only access during the elephant seal breeding season (December 15-March 31); during the rest of the year, visitors may request a permit (no cost) as they enter the park.

You may see – or hear – your first elephant seals just 1,000 feet/305 meters beyond the gate. A turnout on your left, with signs interpreting local geology and offshore rocks and islands, also provides a view to Pole Beach. Harems often develop on the beach during the breeding season, and seals occasionally haul out here at other times of year. A second turnout offers a view down the length of Pole Beach, and just happens to mark 5,778 feet/1,761 meters from the parking lot – a distance equaling the depth of the deepest recorded dive by an elephant seal!

Beyond the second turnout, gravel gives way to shifting sands as you enter a dying dune field. When Sebastián Vizcaíno named la Punta de Año Nuevo in 1603, the point extended all the way to what we now call Año Nuevo Island. Sometime in the following century, the earth shifted and waves scoured the channel, separating the island from today's point. Sand drifting down from northern beaches now continues through the channel rather than building dunes. Meanwhile, irrigation of neighboring agricultural fields has raised the water table, speeding the eventual vegetation and stabilization of the dunes.

That all seems far off as you climb the largest dune around .5 miles/.8 km past the gate. The top of this massive mound of moving sand offers a full panorama of Año Nuevo Point and the multitude of sandy paths and trails crisscrossing the preserve. Guided walks offered during the elephant seal breeding season will follow the route determined by the rangers that day; during the rest of the year, visitors can make their way to viewing areas more than .75 mile/1.2 km from the gate.

More than humble connector trails, the New Years Creek and Steele Trails offer exceptional history, wildlife, and plant communities as they make their way between the Año Nuevo Point Trail and Cove Beach.

The New Years Creek Trail runs between the pond along the Año Nuevo Point Trail and Highway 1 at the southern corner of Año Nuevo State Park. A covey of our state bird, the California quail, makes its home in the thicket at the northern end of the trail. A sweeping panorama of the Pacific Ocean stretches before you as you make your way south across the former pastures of the Dickerman-Steele Ranch. Coast live oak, coyote bush, and ceanothus arch over your path south of the junction with the Steele Trail. Beyond this green tunnel, a steep stairway descends to New Years Creek. From here, you can either continue along the creek to Cove Beach or cross the bridge and continue to Highway 1 along a remnant of the old Coast Road. Watch out for poison oak! 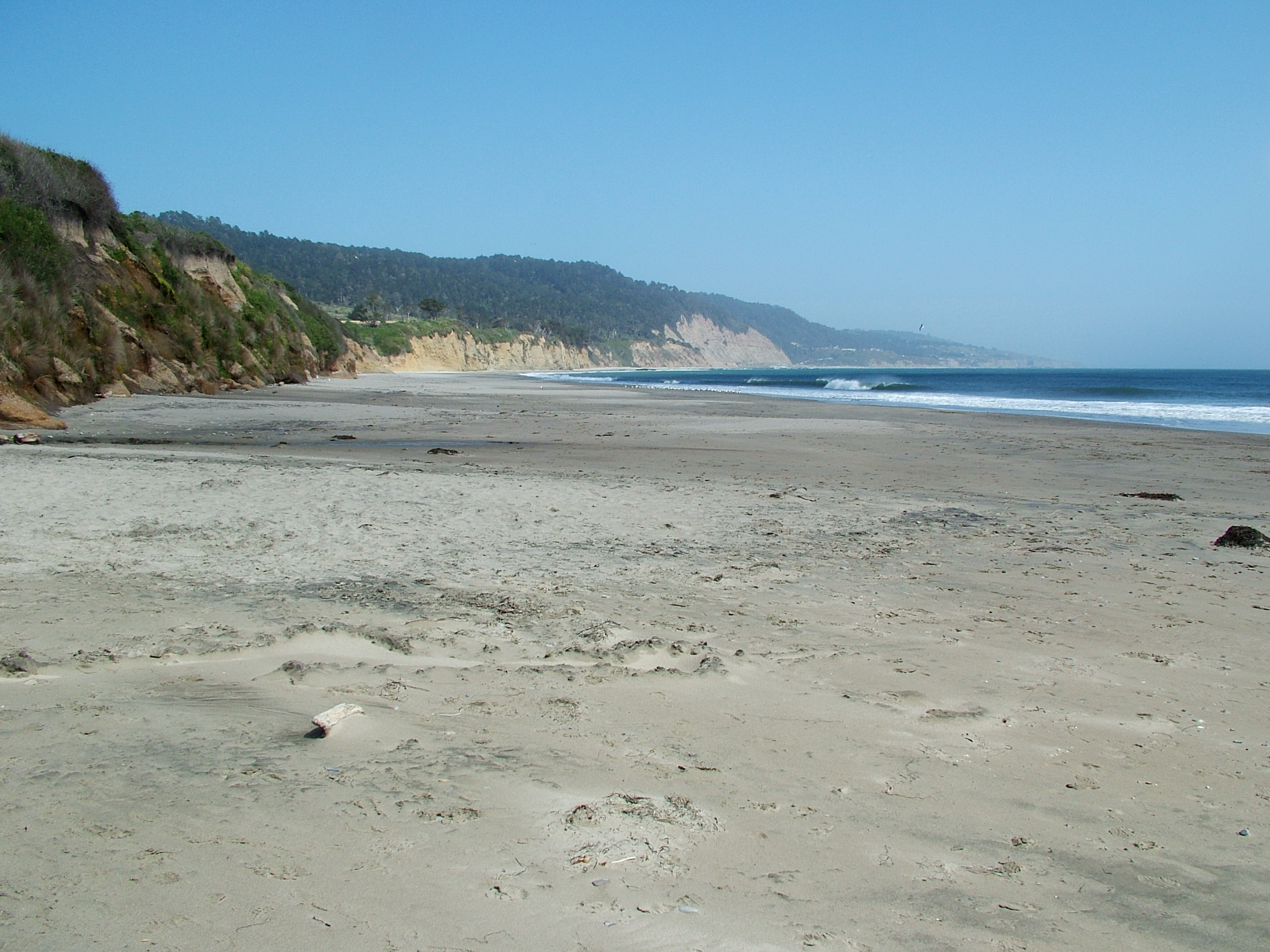 Majestic Cove Beach stretches over 1 mile/1.6 km from the cliffs of Año Nuevo Point to the San Mateo/Santa Cruz county line. Surfers, shorebirds, and seabirds alike flock to the north end of the beach, each for their own reasons: a world-class surf break, a strand rich in intertidal invertebrates, and secluded roosts along the cliffs, respectively. Migrating gray whales, avoiding the great white sharks in deeper water, reliably come near shore in early spring. On an extra special day, you may even spot a stray elephant seal.

Beware of high tides while exploring the beach.

North of the Marine Education Center and Wildlife Viewing Area is a unique section of coastal terraces, scenic bluffs, and secret beaches. 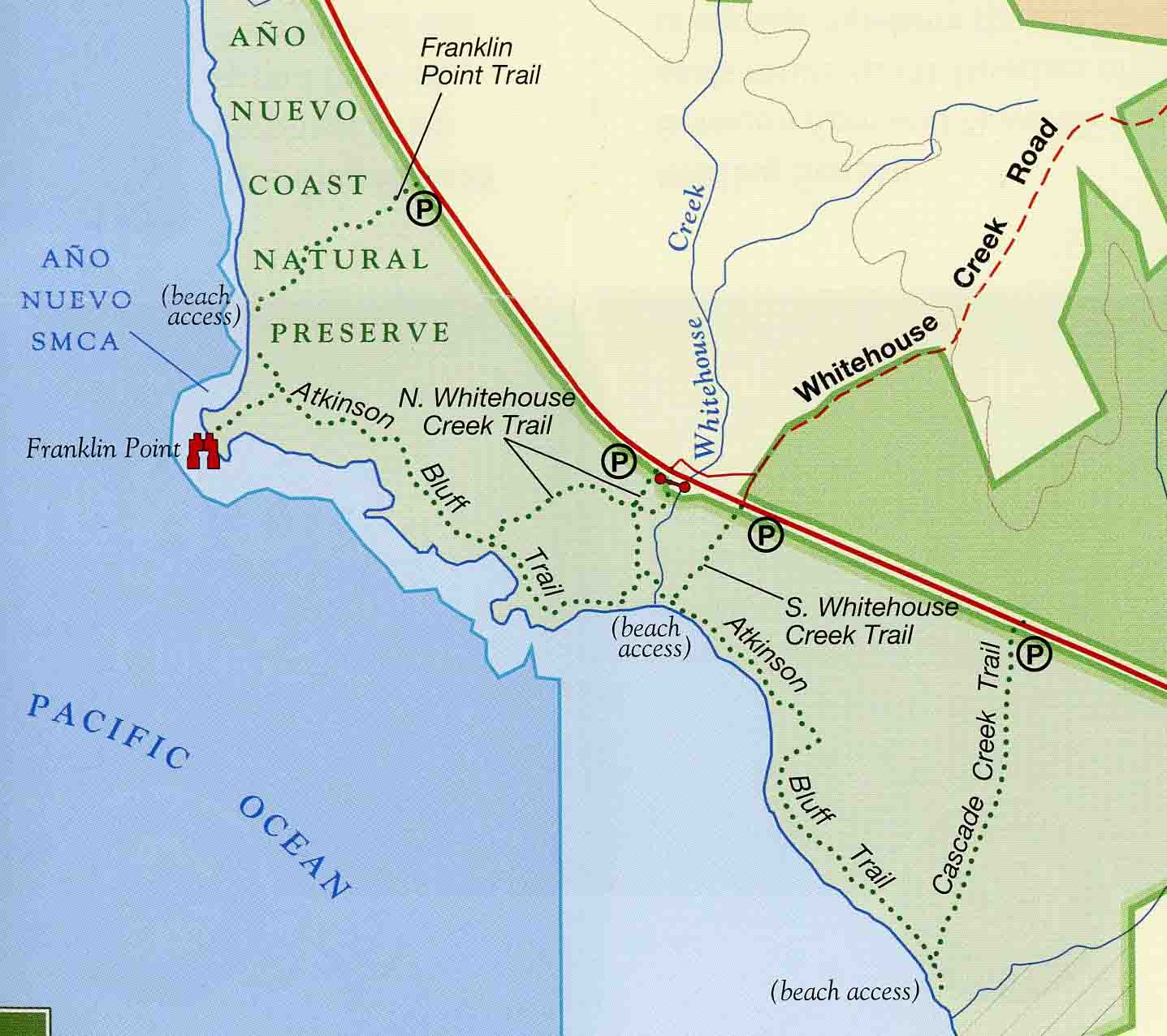 Four trailheads along Highway 1, north of the main park entrance, provide free parking and access to more than 3.7 miles/6.0 km of spectacular coastal hiking along these interconnected trails.

The Franklin Point Trail weaves through dunes to an isolated beach and then to a rocky point where the clipper ship Sir John Franklin, lost in thick fog, wrecked in 1865. Twelve sailors perished. Known ever since as “Franklin Point,” the site of the disaster affords a unique view of Pigeon Point to the north and Año Nuevo Island to the south. Partly because of the tragedy at Franklin Point, lighthouses and fog signals were constructed at both Pigeon Point and Año Nuevo Island, which allowed for smoother sailing in the years that followed.

The Atkinson Bluff Trail hugs the edge of the continent, passing through dunes and coastal prairie as it connects the Franklin Point, Whitehouse Creek, and Cascade Creek Trails. You will find access to secluded beaches at the mouths of the streams, as well as Smugglers Cove, which suggests you’d find something more sinister than seabirds along this stretch of coast back in the “rum-running” days of the 1920s.

The Whitehouse Creek and Cascade Creek Trails crisscross a now-rare coastal prairie habitat maintained by occasional low-intensity prescribed fires over thousands of years. These fields have never been plowed, allowing native wildflowers to thrive; look for their blooms in the spring.

THIS TRAIL IS CLOSED DUE TO DAMAGE FROM THE CZU WILDFIRE