On your right, you will see a list of state parks where you can visit a piece of California's Civil War history.  Click on them for a brief summary of the park's Civil War Connection.  You can then click on the park's name to be taken to the park's website.

Please Note:  Parks marked with an asterisk (*) may soon be closing due to recent budget cuts.  Please contact the individual parks for updated information on hours, accesibility, and available programs.

Benicia Historical Museum
---During the war, Benicia served as the West's most vital armory for Union interests, and consequentially became the focus of several attempts by secessionists to secure Benicia's massive store of arms away from Union troops for the Confederacy.  In early 1861, as the Southern state were still separating from the Union, the most notable attempt at California's secession occurred when future Confederate General Albert S. Johnston, then a Union commander in charge of the Benicia Armory, turned away an armed pack of men who were trying to arm local pro-Confederate militias in an effort to force California out of the Union.

Drum Barracks Civil War Museum
---The officer's quarters located here is the last remaining structure of the former Fort Drum, which was one of California's most active military posts during the Civil War.  On April 13, 1862, Colonel James H. Carleton led the bulk of his "California Column" force of 2,350 volunteers out of Ft. Drum to launch the New Mexico expedition, which would push Confederate control out of Arizona and New Mexico and back into western Texas, where the California Column would continue their victorious campaign.

Mare Island Historic Park
---Mare Island was the U.S. Navy's first base located on the Pacific coast, and its founding commander was none other than future Union Admiral David Farragut (our nation's first), who would later become famous for his quote "Damn the torpedoes! Full speed ahead!", and for his exploits in attacking the defenses at Mobile Bay.  Building 46, a former smithery and later pipe shop that was originally constructed in 1855, houses many artifacts from the Civil War era, and tells more of Farragut's story there.

Oak Grove Butterfield Stage Station
---This station, one of the few surviving mail stations actually built by the Butterfield Overland Mail Company, was designed to serve as a “swing stop” for exchanging mail and horses in preparation for a rider’s long journey along the famous Butterfield Overland Stage route across the western United States. This station also served to re-supply traveling soldiers who used the Butterfield route in travels across the West. During the war, this location was occupied by the U.S. Army, and given the post name of Camp Wright, and was stationed by the 1st Regiment of California Volunteers, who were given orders to intercept any secessionists attempting to leave California to join with the Confederacy. Such an event occurred at nearby Minter’s Ranch on November 28, 1861, when California Legislator Daniel Showalter, along with a party of fellow secessionists, were caught by the 1st Regiment in an attempt to join the Confederacy. Showalter would swear allegiance to the Union in order to be set free, but would become a Lt. Col. In the Confederate Army in 1862. 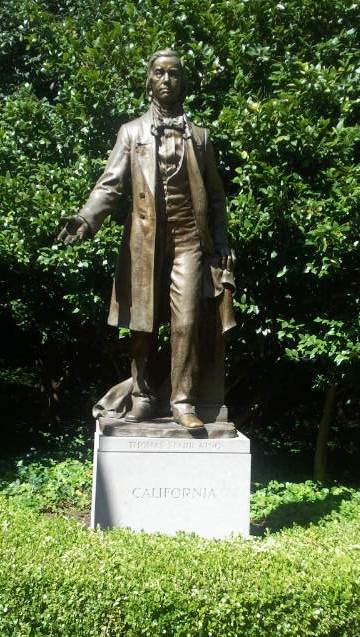 Statue of Thomas Starr King in Capitol Park, referred to by contemporaries as "The orator who saved a nation"