Coast redwoods are dependent on a moist climate for their survival.  Year round fog acts as insulation, cooling the forests in the summer months and warming them in winter.  By transpiring, or “breathing out” huge amounts of moisture, coast redwoods 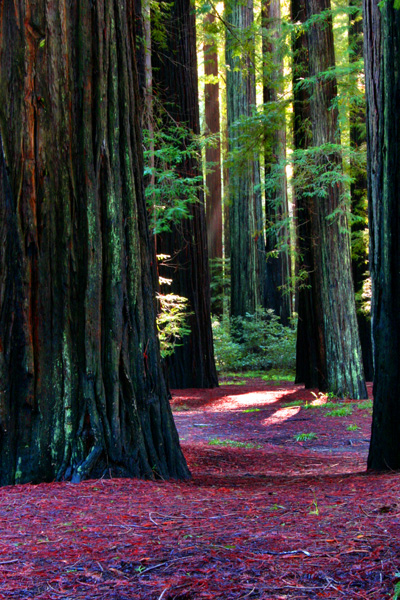 can create their own fog!  A single redwood can transpire as much as 500 gallons a day. That’s as much water as you might use in an hour long shower!

The forest is full of clones!  Although redwoods can grow from seeds, they are much more successful at cloning themselves.  Young redwoods will sprout up from the base of a mature tree, utilizing the parent’s developed root system for more rapid growth and nutrient uptake.  This is what gives the coast redwood its scientific name, Sequoia sempervirens, which means “ever-living.”  Several generations of trees can be seen growing in a ring around where a parent tree once stood.  These “fairy rings” carry genetic codes millions of years old!  A redwood’s roots are surprisingly shallow, only 4-8 feet on average with no tap root.  The root systems extend out to 100 feet or more, giving stability to the surrounding ground and helping to stop erosion.  Coast redwoods growing along stream channels attain the greatest size and are an important factor in keeping watersheds free from sediment.  This in turn helps salmon and other animals dependent on clean, clear water.

Components of an Ancient Forest 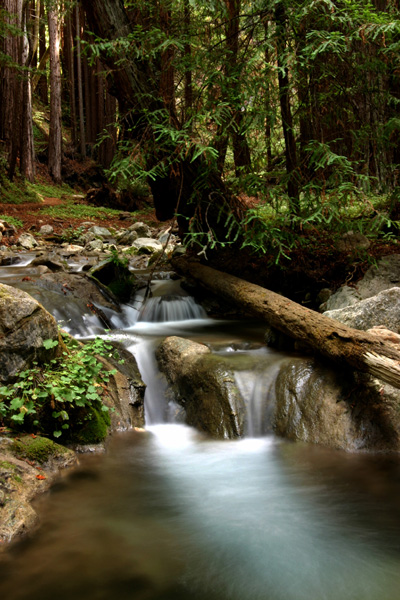 An ancient forest means more than just “old” trees!  There are young trees, middle aged trees, old trees and dead trees.  This forest can be thought of as different levels of branches which together form a multi-layered canopy. This living sponge traps moisture from the atmosphere and increases the forest’s ability to store water.  Coarse woody debris on the forest floor provides nutrients for future generations of trees, restricts the flow of surface water and reduces soil erosion.  Downed trees supply a fertile base for forest creatures to live upon.  Logs in streams slow the flow of water and create habitat for plants and insects which in turn are food for fish, birds, and mammals.