Alfred Hart and Eadweard Muybridge's historic glass plate photographs captured the
luxurious rooms of the Leland Stanford Mansion in a moment in time
and are on display in the Mansion Ballroom. 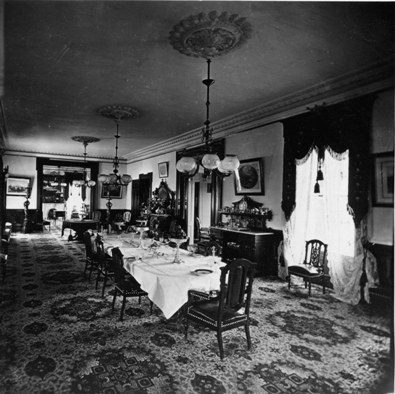 The Leland Stanford Mansion State Historic Park opened to the public in 2005 with a stunning $22 million restoration.  Thanks to Leland and Jane Stanford’s documenting their beautifully decorated new Second Empire style Sacramento mansion with the latest technology in black and white photography in 1872, the public-private partnership of California State Parks and the Leland Stanford Mansion Foundation with its project team of architects, archaeologists, historians, interpreters, curators, designers, painters, gilders and lighting experts were able to work from original sources in recreating its spectacular Victorian interiors.

The Stanfords had photos taken of their more modest original house in 1868 by Alfred Hart and again in 1872 by Eadweard Muybridge after an extensive remodel that expanded the mansion to 4 floors, 44 rooms and 19,186 square feet.  (Muybridge photo of Mansion Dining Room is pictured at the right)

In the 1872 photos, we can see the growing wealth and social prestige of the Stanfords reflected in an opulent showplace—one that once again brilliantly hosts distinguished international visitors as the Governor and Legislature’s official Protocol Center.

An invitation to one of the Stanford’s lavish dinner parties or private balls was a coveted opportunity for upwardly mobile Californians to be on display among the mansion’s imported crystal chandeliers, dazzling mirrors, fine carpets, lavish draperies and works of art by famous painters.

Alfred Hart (1816-1908) was a romantic landscape painter and official photographer of the Central Pacific Railroad in the 1860s whose patron was Judge Edwin B. Crocker, founder of Sacramento’s Crocker Art Museum.  Hart traveled through the Sierra Nevada mountains in a wagon specially built for photography with a dark-room.  The interiors in this exhibit would have been an unusual subject for him. 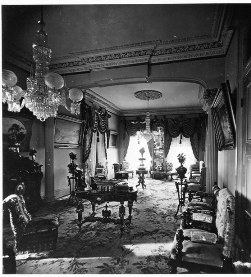 Eadweard Muybridge (1830-1904) was a colorful character who began his career photographing Yosemite and San Francisco in the late 1860s, which developed into a job with railroad baron Leland Stanford.

In 1877, Muybridge helped Stanford prove that all four feet of a trotting horse were off the ground simultaneously by setting up 24 cameras along a track with trip wires triggered by a horse at his Palo Alto Stock Farm (now Stanford University).  This legendary experiment, “The Horse in Motion” and his other motion study series of humans running, dancing, etc., led to the development of motion photography with his Zoopraxiscope, featured at the World’s Columbian Exposition in Chicago in 1893, and considered a precursor to the modern motion picture. Learn more about Eadweard Muybridge