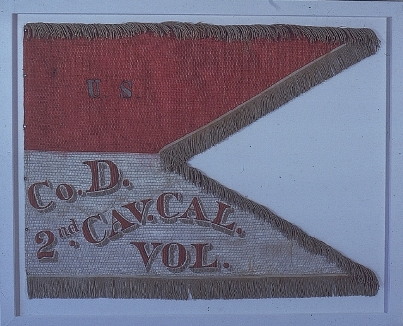 17,000 Californians volunteered during the Civil War. Most of them served in the American West as federal troops were relocated to the east. The 1st Cavalry formed part of the “California Column” which helped to reclaim Arizona and New Mexico from invading Confederate forces. Company M was mostly made up of Sacramento volunteers. It was organized in 1863 at Camp Union, Sacramento. After serving in New Mexico, the unit was mustered out in 1866. This cavalry standard or guidon has adapted the blue canton with 36 stars and a field of red and white strips from the national colors.