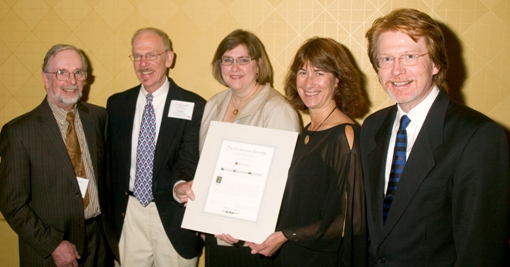 The prestigious Victorian Society in America (VSA) has named the Leland Stanford Mansion State Historic Park as one of six award winners for meritorious preservation and restoration projects completed in the past two years. During its 41st Annual Meeting and Conference in Mobile, Alabama, April 2007, the society presented the award to California State Parks Capital District Superintendent Catherine Taylor and State Parks Project Manager and Senior Architect Maria Baranowski.

“We are honored to receive national recognition for the superior architectural restoration of the Stanford Mansion,” said Ruth Coleman, Director of California State Parks.  “This is a prime example of a public and private partnership coming together to preserve part of the state’s past.” 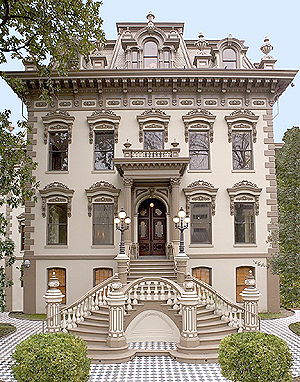 The Mansion is used not only as the state’s center for protocol, but also as a public attraction for the people of California. A $22 million rehabilitation returned the Stanford Mansion including its interior design to its late 19th century Victorian opulence.

Completed in 2005, it began serving as the official reception and protocol venue for Governor Arnold Schwarzenegger and the leadership of the California Legislature. As a house museum within California State Parks, the Mansion welcomes the public to tour daily, except Thanksgiving Day, Christmas Day and New Year’s Day.

Attributed to Sacramento architect Seth Babson in 1856, the home was designed for Sacramento merchant Shelton C. Fogus. Fogus sold the home to Leland Stanford in 1861 shortly after Stanford’s nomination for Governor, as well as his just having been named president of the Central Pacific Railroad. It served as the Governor’s Mansion after his election.

"When Leland Stanford attended his own gubernatorial inauguration in 1862 by rowboat, he decided to raise his mansion one story in 1872 to avoid future flooding.  Following 20 years of exhaustive studies and restoration with incredible attention to the Second Empire architectural detailing, the Stanford Mansion is California's most loved public treasure," said Milford Wayne Donaldson FAIA, California's State Historic Preservation Officer.


Stanford then leased it to the state for use by Governor Frederick Low and Governor Henry Haight. It was subsequently donated to the Catholic Diocese in 1900 as a children’s home, after the death of the Stanford’s only child, Leland Jr.  Due to the cost of maintenance it was sold the state in the 1970s.

It was acquired by the state in 1978, listed on the National Register of Historic Places in 1981, and dedicated as a National Landmark in 1987. The mansion was identified as needing massive restoration in the late 1990s. California State Parks joined together with the Leland Stanford Mansion Foundation to secure necessary funding.

Other preservation award recipients include the Pennsylvania State Capitol Building; Union Station in Springfield, Illinois; Server Hall at Harvard University; Union League of Philadelphia and a commendation for the Woodrow Wilson Birthplace in Virginia.  Visit the Victorian Society in America website.

The Victorian Society in America was founded by leaders in historic preservation and fulfills its mission through its publications, symposia, architectural tours and renowned summer schools in Newport, Rhode Island, and London, England. There are 16 chapters in the United States.