Linking the United States with the California Frontier

The San Diego Herald Newspaper proclaimed the First Transcontinental Mail Delivery " the most
important event which has ever occurred in the annals of San Diego, and undoubtedly constitutes
an epoch in the Pacific Coast of the Union, which will be recorded and remembered with just pride,
long after the mails will have been transported on the great continental railroad
the first rail of which may be thus said to have been laid."
(San Diego Herald September 5, 1857)

In 2007, several agencies in the southland had events to commemorate and memorialize the 1857 completion of the San Antonio and San Diego Mail Line (SA&SD).  The SA&SD was the first intercontinental communication link, joining the newly-won western territories with the Midwest and East Coast of the United States.  The SA&SD blazed the trail for the Butterfield Stage route that replaced it in 1858.  Several equestrian-focused reenactments happen along the SA&SD mail line and official celebration of the arrival of the first mail takes took place on August 31, 2007 in Old Town San Diego SHP.

Find out what the archaeologists learned in the Historical and Archaeological Investigations at the Carrizo Creek Stage Station report. The archaeologists' site research has helped to write part of the stage line story once lost to the desert sands of California. 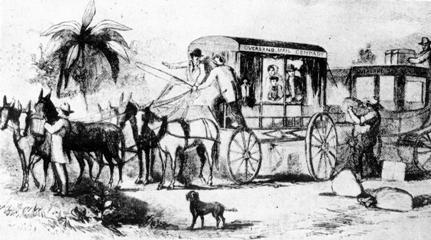 Five historic stage stations related both to the San Antonio & San Diego Mail
Line and Butterfield Stage Route had special activities in conjunction
with our 150th anniversary of the completion of the first Transcontinental Mail Line:

3) Warner's Ranch Stage Station is located on Vista Irrigation District property and was visited during a driving tour in February 2007. For more history on Warner's Ranch use this link to the Library of Congress website and search on Warner Ranch. More information is available at the San Diego History website.

5) Little Temecula Rancho Stage Station was also a stop on the Butterfield Stage Route. The actual station location is under modern construction, but historic Vail Ranch across the street was the end stop for the June 2007 Driving Tour. The portion of the driving tour was coordinated with Temecula Valley Historical Society and Vail Ranch. Plans included a visit to the "Wolfe Store" in Temecula.  Use this link for more Temecula Rancho information.

In early August 2007, a driving tour to other stage stations sites in West San Diego County was held. These sites include: Santa Maria and Penaquitos. 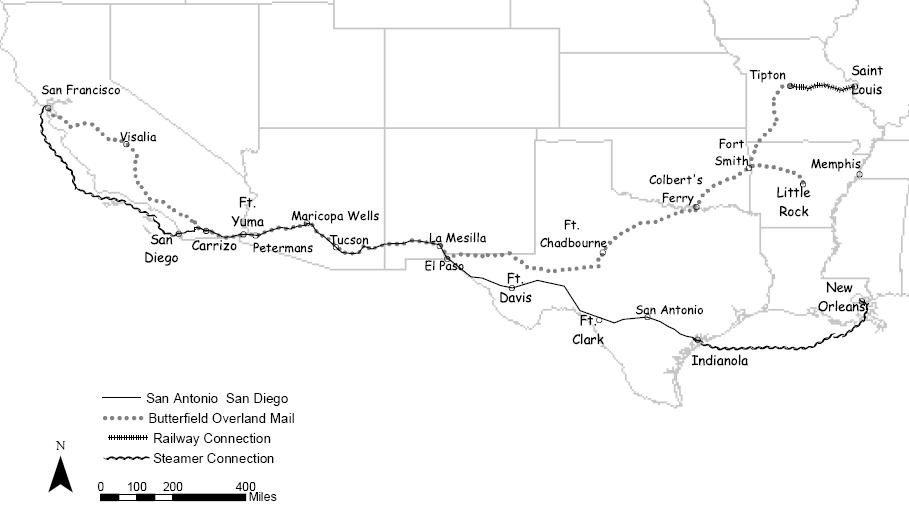 Map of the Routes of the San Antonio and San Diego and Butterfield Overland Mail Lines
(California State Parks)
Use this link for a  Printable Version of SA & SD and Butterfield Lines  Map.  (pdf 48.8 kb) 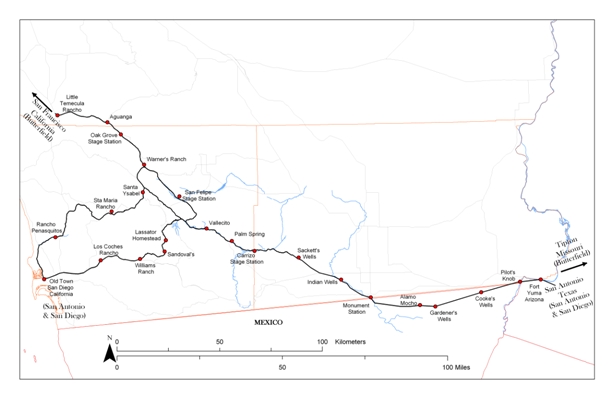 The San Antonio & San Diego Mail / Butterfield Stage crosses some 35 miles of the Anza-Borrego Desert State Parklands.  Today, driving on paved roads, the park visitor can easily experience vast areas of the Anza-Borrego Desert that in earlier decades were only accessible by foot or on horseback.  Commuters regularly travel between Yuma, Arizona and San Diego, California, a trip of less than 8 hours and of no particular hardship.  In the nineteenth century, however, such a journey took many days and without proper planning, could be quite dangerous.

The delays and hazards not only made travel difficult, but precluded reliable communication.  Today, computers and cell phones provide us with instant communication.  In the nineteenth century, letters took days to compose and months to cross the Southwest deserts and Midwest plains between the West and East coasts of the United States.  In 1850 San Diego, it might have been months before the citizens learned of important news events such as the election of the President or a scientific discovery.

Shortly after California was annexed to the United States at the end of the Mexican-American War in 1848, reliable transportation and communication between the West and East coasts became an immediate need.  The United States sent expeditions to explore the southern route for transportation and communication possibilities.  This southern route had been known by several names since parts of it had first been used by Juan Bautista de Anza.   In the early 1800s it was known as the Sonora Road, used regularly by Mexicans traveling between Sonora and California.  In the mid-1800s, the United State military expeditions of General Stephen Kearney and Colonel Phillip St. James Cooke traversed the desert along the route to occupy California during the Mexican-American War.  In 1849, it became known as the Southern Emigrant Trail, used by thousands of Americans traveling to the gold fields in Northern California.

Use this link to read about the history of the San Antonio & San Diego Mail Line and the Butterfield Stage. (pdf 540 kb)

Additional information is available at this link to Butterfield Stagecoaches. 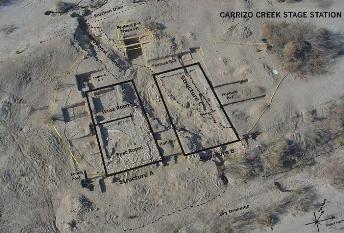 Use this link to View Large Image of Carrizo Creek Stage Station.