Archaeologist Terry Jones of California Polytechnic State University acknowledges that the Malibu Lagoon Chumash could have encountered Polynesian master navigators, who gave their tomol  building skills to the Chumash.

The Chumash called themselves “people of the tomol.” They called their canoe a “house of the sea.” For the Chumash people of the Southern California coast, the sewn-plank canoe, or tomol, was an all important part of their lives. 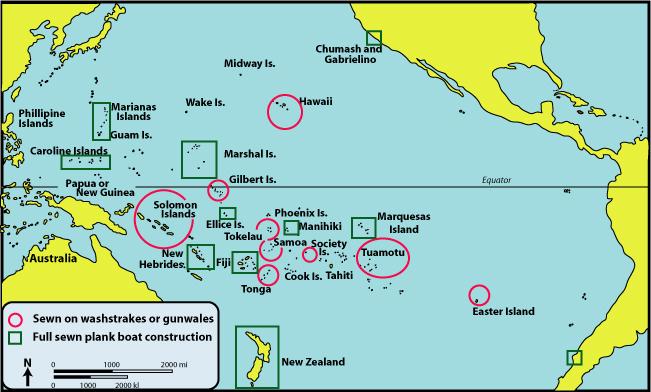 Alfred Kroeber talks about the possible Chumash-Polynesian connection in his 1939 book:

There is a definite climax in [the southern California] area among coast and island Gabrielino and Chumash, whose culture was semi-maritime, with seagoing plank canoes.  Although this climax culture was likely to have been further developed locally once it had taken root on the Santa Barbara Islands, its spontaneous origin on the mainland coast and growth to the point where it could reach the islands are hard to understand on the basis of either a Californian or a Sonora-Yuman culture basis.  There is therefore a possibility that its impetus came in part either from the Northwest Coast or from across the Pacific, to both of which regions there are sporadic but fairly specific parallels: harpoon, canoe, round shell fishhooks, psychological cosmogony…..but the abundant archaeological evidence shows that this puzzling local climax culture as a whole far antedates any Caucasian contacts
(Handbook of California Indians, Alfred Kroeber, 1939:44-45)

Among North American Indians, only the Chumash, and later the neighboring Gabrielino, built sewn-plank canoes. In the Western Hemisphere, this technology is otherwise known only from the coast of Chile and among Pacific Islanders. The tomols were able to carry large loads for long distances which could allowed for navigation across the Pacific.

For more information about the Chumash-Polynesian connection use his link to email Terry Jones at Cal-Poly. 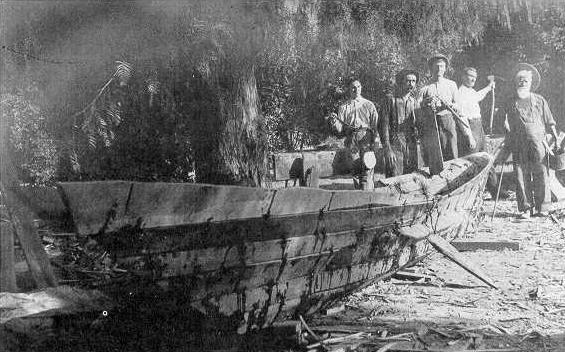 Replica of a sewn-plank "Chumash Tomol" constructed by J. P. Harrington in 1912.
(Photo from Terry Jones)