California State Parks proposes to build the High Sierra Crossings Museum, a new visitor facility that will replace the existing and outmoded 40-year old Emigrant Trail Museum at Donner Memorial State Park.  Funding for the proposed undertaking is largely provided by the Federal Highway Administration (FHWA) through a grant from the Inter-Modal Surface Transportation Enhancement Act (ISTEA), a grant program administered by Caltrans. Because there is federal funding involved, Section 106 of the National Historic Preservation Act (NRHA) is required to supplement the California Environmental Quality Act (CEQA) in managing the affects of project work on historic properties and archaeological sites.

The process for a project of this type is dictated by law. The first step is a full archaeological survey and recordation of any historic or prehistoric features that might be present. Upon completion of this survey, if sites are discovered, an excavation plan and a research design are prepared. Once these plans are approved, a test excavation may begin. Since there are known prehistoric and historic sites in our project area, we planned an excavation to determine whether construction activities would impact any resources. An archaeological excavation of this type is common among state and federal agencies since it is part of environmental compliance. In the case of this project interest in it is heightened due to the recent excavations on actual Donner Party sites located outside of the State Park boundary.

The proposed location for the new High Sierra Crossing Museum is situated near the existing Emigrant Trail Museum in an area of both prehistoric and historic archaeological sensitivity. The general area of the proposed museum has been used historically for many functions. It is located along the historic Lincoln/Victory Highway (US 40) and there could be remnants of historic buildings that housed businesses along the road. While the location of the museum is not near any of the known Donner Party cabins or campsites, the extent of the test excavation is to ensure that we are not impacting any sensitive historic archaeological evidence that was previously unknown.

The focus of the High Sierra Crossings Museum would expand beyond the experiences of the pioneers to include the role that transportation has played in the development of California, interpreting road and railroad development through the Donner Pass area as well as human and natural resource history there through time.  (General Plan-Approved 2003, Vol. 1 Page 6, see document link below)

"There are Native American sites that go back long before the Donner Party," said Hayden Sohm, superintendent for the Sierra district of California State Parks. "People have been crossing Donner Pass for thousands of years and camping at the lake. After the Donner Party, the pass was the main route for wagons, and then the railroad and now the highway."  (excerpt from Frank Mullen's  Reno Gazette-Journal  article, June 6, 2006)


In the archaeological survey scheduled for later this year, DPR's work at the proposed site of the new High Sierra Crossings Museum is to help workers avoid any prehistoric or historic archaeological deposits. An example of possible artifacts that could be found in the area are Martis Corner Notched Points (pictured below). These Martis Series points are local to the Sierra Nevadas. Both percussion and pressure flaking processes were used in manufacturing Martis points and they were often made of “basalt."  Such notched points could be found during the survey, given that there are some major prehistoric basalt quarries located in the High Sierra north of Lake Tahoe that probably supplied much of this raw material.  (Justice, 2002: pp. 216-217)

Martis Series points are fairly large and are usually associated with atlatl and dart hunting and " the weapon of choice long before the introduction of the bow and arrow. Recent estimates place the age of this culture as far back as 4000 BC, if not earlier." (Martin, 1998) 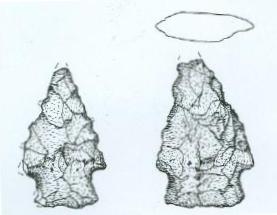 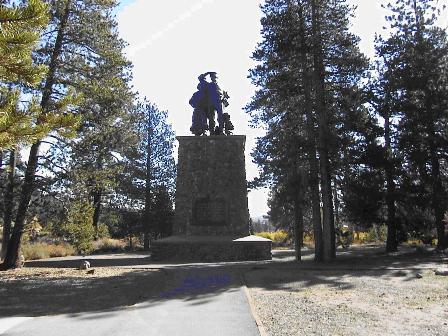 Donner Memorial sculpted by John MacQuarrie of San Francisco.
Dedicated on June 6, 1918 by the Native Daughters and
Native Sons of the Golden West.

Within ten years of the Donner tragedy, the site gained national interest.  As early as 1854,  Lola Montez and a party made an excursion to the site to collect souvenirs. Later,  Charles F. McGlashan, a Truckee journalist, became a driving force who pushed for over 20 years to erect a monument to the Donner Party. He was very concerned with placing the monument on the exact site where the Breen cabin had been. In 1894 Joseph Marzen, who had owned the land on which the cabin was located, donated one acre of land of land to C.F. McGlashan. In 1909 the community held a ceremonial groundbreaking on the site for a project to erect a monument. In 1910, the cement foundation for the monument was laid and McGlashan deeded the one-acre of monument land to the Native Sons of the Golden West.  The monument, sculpted by John MacQuarrie of San Francisco, was finally dedicated on June 6, 1918 by the Native Daughters and Native Sons of the Golden West. The concrete foundation, over 23 square feet, covers the original floor of the Breen cabin (Department of Parks and Recreation 2002: 44).

In 1920 the Native Sons of the Golden West signed a lease to create a concession next to the monument.  This concession maintained a gravel road that provided public access to the monument from Highway 40.   The Donner Ice Company owned the land surrounding the monument from 1895 to 1907. The Pacific Fruit Company purchased the property from Donner Ice Company in 1908. In 1924 the company conveyed 10 acres immediately surrounding the one-acre parcel to the Native Sons of the Golden West, increasing the monument’s acreage to 11. In 1934 the “Donner Monument” or “Pioneer Monument” was officially designated as California Historic Landmark Number 134 (Department of Parks and Recreation 2002: 44).

On May 23, 1928, the Grand Parlor of the Native Sons of the Golden West conveyed 11 acres of land to “the People of the State of California” so that the Donner Memorial would be accessible to the public.  Also in 1928, another 5.1 acres was added to the park northeast of the monument and the whole parcel was transferred from the Department of Finance to the newly formed Division of Beaches and Parks (Department of Parks and Recreation 2002: 45).

In 1930 the Division of Beaches and Parks cancelled the Native Sons of the Golden West concession contract at the monument and converted the building into park headquarters. In addition to the new headquarters, by 1948, the park included the Murphy cabin site and 344 acres surrounding the monument site.  Development of a formal campground followed the land acquisition. By 1951 the Creek Campground was open with two combination buildings to serve campers. A vehicular bridge that is currently still in use was also constructed when the campground was developed. This bridge provides access to the south side of Donner Creek (Department of Parks and Recreation 2002: 45).

More improvements to the park came in the early 1960s. Ridge Campground was operating by 1960 and Splitrock Campground was by 1965.  In addition to the new campgrounds, on January 20, 1961 the National Park Service designated Donner Memorial State Park a National Historic Landmark. The landmark was revised in 1963 to include only the Murphy Cabin site and the Donner Monument. To enhance the memorial site, the Emigrant Trail Museum opened in 1962. The goal of the museum was to “honor man’s quest to reach the Promised Land – California” (Department of Parks and Recreation 2002: 45). Since the 1960s, there have been several small property acquisitions and improvements to the park, none of which occurred within the project APE.