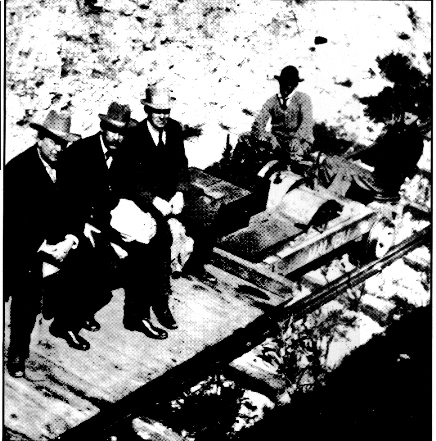 Merritt was born in 1888, in Los Angeles. As a young man, he took charge of the family sheep ranch in Arizona, after his father died.

There, he became a "blood brother" of the Havasupai tribe, and in college was nicknamed "Great Chief White Smoke," or simply "Smoke Adamson."

At the University of Southern California, he became captain of the last rugby football team, there. He graduated from USC Law School, passed the bar, and went to work as Superintendent of the Malibu Ranch.

There he met and married Rhoda Agatha Rindge, May K. Rindge's daughter, in 1915. Merritt Adamson's forte was farming, and he established the Adohr ("Rhoda " spelled backward) Stock Farms, which became a very large milk producer--one of the world's largest.

Adamson achieved many business and civic honors--too many to relate. He died in 1949, and Rhoda took over the stock farm, other family investments, and the Adamson House. The house, designed by a well-known architect, Stiles Clements, was constructed beginning in 1929, this classic home was built for Rhoda Rindge Adamson and her husband, Merritt Huntley Adamson, daughter and son-in-Iaw of Frederick Hastings Rindge and May Knight Rindge, last owners of the Malibu Spanish Land Grant.  Occupied by the Adamsons during the summer, beginning in 1930, and lived in all year beginning in 1937. One special feature of the two-story house is the elevator, which was installed specifically for Mrs. Adamson in 1958. She died in 1962.

The State of California  purchased the property in 1968.  In 1971, the president of Pepperdine University moved in, as part of an effort to maintain the house until it could be properly restored and shown to the public as an historic unit.  The Malibu Lagoon Interpretive Association was formed in 1981, and they carefully planned for the opening of the house as a museum two years later.