California's magnificent Coast Redwood is the world's tallest known tree and one of the world's oldest trees. Average mature trees, several hundred years old, stand from 200 to 240 feet tall and have diameters of 10 to 15 feet, and some trees have been measured at more than 360 feet. The tallest tree in the world, The Stratosphere Giant located here at Humboldt Redwoods State Park, is just over 370 feet tall. In the most favorable parts of their range, Coast Redwoods can live more than two thousand years. 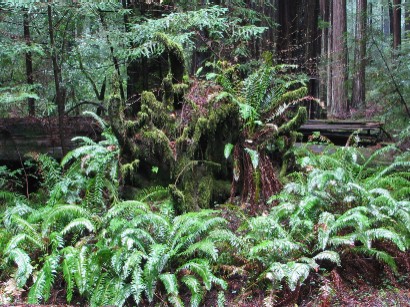 Redwoods are named for the color of their bark and heartwood. The high tannin content of the wood gives the trees remarkable resistance to fungus diseases and insect infestations. The thick, fibrous bark has an even higher tannin content, and insulates them from the periodic fires which have occurred naturally down through the centuries in the redwood region.

These immense trees have delicate foliage. Narrow, sharp-pointed needles only one-half to three-quarters of an inch long grow flat along their stems, forming feathery sprays. Redwood cones are about an inch long and each cone contains 14 to 24 tiny seeds; a pound of redwood seeds would number more than a hundred thousand. Redwood seedlings grow rapidly, more than a foot per year in good conditions. Young trees also sprout from their parents' roots, taking advantage of the established root system.

Coast Redwoods form almost pure stands in some areas, especially on flat, silt-covered river and creek plains such as the Bull Creek Flats area and the Rockefeller Forest. Coast Redwoods are also found in mixed evergreen forest with the majestic Douglas fir, as well as western hemlock, grand fir, and Sitka spruce. On drier slopes tan oak, madrone, maple, and California bay laurel grow along with the evergreens. Rhododendrons and a variety of ferns are the most common under story plants. Other plants which flourish under the trees in the duff of fallen needles include poison oak, huckleberry, hazel, and many flowering herbs. 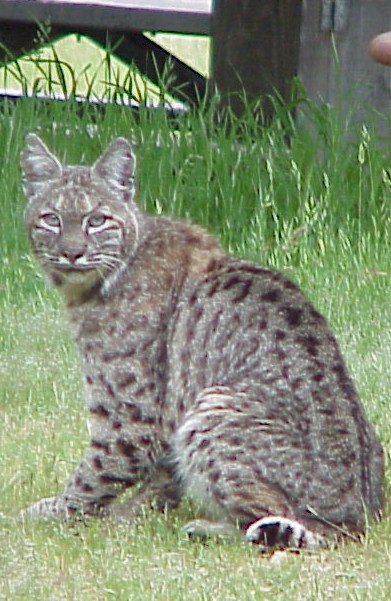 This bobcat was spotted at Cuneo Creek. Other mammals found in the redwood forest include the ubiquitous raccoons and skunks, black bears, Roosevelt elk, deer, squirrels, porcupines, weasels, mink, and the rare ringtails. Among the birds found here are the marbled murrelet and the northern spotted owl, both of which nest almost exclusively in old-growth redwood and Douglas-fir forest. Many visitors in the redwoods notice a common mollusk, the yellow banana slug.

It is generally believed that the last ice age limited the Coast Redwoods to their present range, a narrow 450-mile strip along the Pacific Ocean from central California to southern Oregon. In the redwood belt, temperatures are moderate year-round, and heavy winter rains and dense summer fog provide the trees with the water they need. This climate was far more common in earlier eras. Paleobotanists have discovered fossil redwoods throughout what is now the western United States and Canada, and along the coasts of Europe and Asia. Some of these fossils are as much as 160 million years old. Redwoods are relatively recent arrivals in their current region; the earliest fossil record in California is found in rocks less than 20 million years old.

A natural Coast Redwood forest is a perfect recycling system. The soil (like that in any high-rainfall climate) contains few nutrients; most of the substance necessary for life is in the trees themselves, living and dead, and in the other plants and animals of the forest. If trees are removed from the forest instead of being allowed to die and decay naturally, many nutrients are lost from the cycle.