Will Rogers on Horses 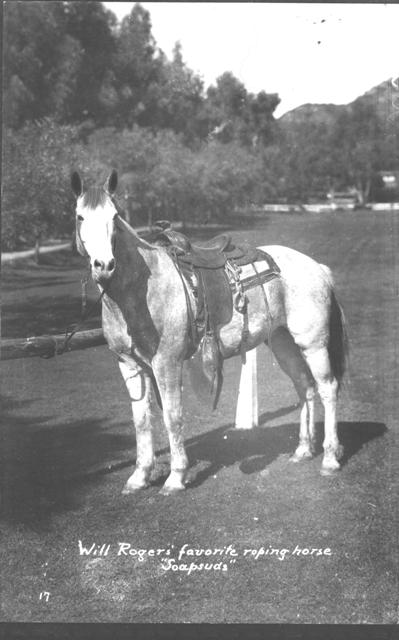 Will Rogers was a horse man. Throughout his life, he owned horses and his children had horses. For cowboying, acting or playing, Will Rogers had horses.

As a young cowboy, his vocation was roping from horseback. He refined his trade into fine arts of trick roping. He mastered horsemanship becoming an accomplished trick rider and polo player with a three-goal handicap.

Comanche was his favorite pony as a boy. Soapsuds was his favorite as an adult. There were many other horses--with names like Dopey--that reigned in Will Rogers' life and captured his fondness. His writings about horses are memorable.

"A man that don't love a horse," Will Rogers wrote August 17, 1924, in the New York Times, "there is something the matter with him.

"If he has no sympathy for the man that does love horses then there is something worse the matter with him."

"The old horse is coming back in a high lope. Thousands of people are riding a horse today that five years ago couldn't sit in a Ford with all the doors locked.

"Polo, racing and horse shows all are doing great work to help the farmer and rancher to raise better horses.

"Legalize racing in every State. Sure people will bet, but they get to see the horses run and you certain can't see General Motors and General Electric and General Utility run when you bet on them." column: New York Times, April 4, 1932

(Commenting on the death of Phar Lap, the Australian race horse, that died after running in California.) "Too bad, Australia." Rogers wrote, "Phar Lap was just a horse but he brought you honor and represented you nobly."

About fiesta day in Santa Barbara, Calif., Will Rogers wrote in the New York Times, August 19, 1932: "Hundreds and hundreds of beautiful horses in the parade and a man without a silver saddle is a vagrant.""

"If I wanted good horses I would never leave America to get 'em and if they will let 'em race in every State we will have better ones everywhere." New York Times, October 1932.

Commenting on the depression-era possibility that his family may be forced to eat horses because that was all he raised on his ranch, Will Rogers wrote March 2, 1933: "I love horses and I only ask--don't let me know which one we are eating today."

"The country has gone sane and got back to horses," Will Rogers wrote May 12, 1933 in New York Times.

At Aklavik, Northwest Territories, August 12, 1935, Will Rogers wrote "there is a horse here--the furthest north of any horse, and he eats fish and travels on snowshoes."

"Horsemanship through the history of all nations has been considered one of the highest accomplishments," Will Rogers wrote in April, 2, 1934. "You can't pass a park without seeing a statue of some old codger on a horse. It must be to his bravery, you can tell it's not to his horsemanship."

"Money, horse racing and women three things the boys just can't figure out," Will Rogers wrote March 7, 1935 in the New York Times.  About Arabians, Will Rogers said "they are long winded. There is a Senator among every colt born." June 5, 1932 syndicated column.

"After seeing kids play polo against big guys, it only shows that horses are the greatest equalizer in the world. No matter what you weigh, the little fellow is your equal on a horse." syndicated column May 29, 1932.

"There will never be a time when the old horse is not superior to any auto ever made." syndicated column September 11, 1932.

"They used to take your horse and if they were caught they got hung for it. Now if they take your car and if they are caught it's a miracle." column September 11, 1932.

From Will Rogers Memorial Archive.