Stewardship at the Sumeg Village of Sue-meg SP 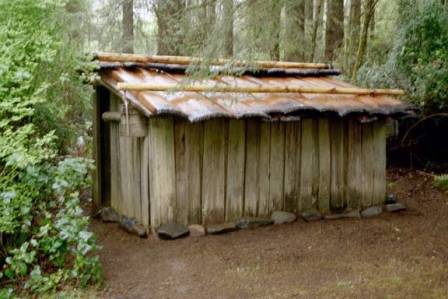 In fiscal year 2003/04 a stewardship project was developed to revitalize the buildings in the reconstructed Yurok village of Sumeg.  Restoration work included replacing worn hazel lashings, deteriorated redwood planks, and general clean-up of vegetation encroaching on the buildings and surrounding stone work.  This work was done under the guidance of Steve Ortiz, Maintenance Supervisor with Axel Lindgren, Maintenance Worker I, working as field supervisor and active participant in the specialized work.  Axel has a heartfelt interest in the village as he is a Yurok man, born and raised in nearby Trinidad.

The efforts to improve the condition of the buildings were designed as a training experience to pass on the skills needed to construct these traditional living areas.  Repairs were made to the family houses, a sweat house, changing houses used during the annual Brush Dance, and to the dance house.  The work was photographed and video taped for an instructional booklet and video that will be used to educate State maintenance personnel as well as up-coming generations of Yurok, Hupa, and Karok youngsters who want to carry on their heritage skills. 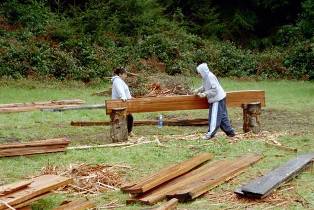 State Parks contracted with the Hoopa Tribal Civilian Community Corps for most of the labor involved in this project.  The young people who serve in the Corps learned, through interaction with elders, how to evaluate and split redwood logs, shape the planks, harden the roofing edges to protect them from the weather, and how to construct the houses to keep out the rain.  In this process they were taught how to work with many different tools as a team to complete the project goals.

While the restoration work at Sumeg Village progressed, State Park Archaeologists were partnering with Yurok tribal members to survey and evaluate all the cultural features within Sue-meg SP as contributors to a potential Traditional Cultural Property nomination to the National Register of Historic Places.  Oral interviews were held with tribal elders to learn what they knew about Yurok use of the land through time.  Geographic points of interest to the tribe, located within the park, were visited and recorded as contributors to the nomination.  Work on the nomination process is continuing as State Parks works with the Yurok Tribe to share with the public the wonderful richness of life on the Northwest Coast, past, present and future. 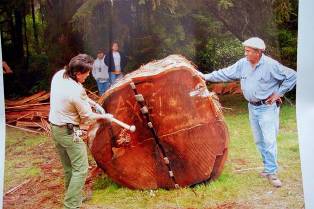