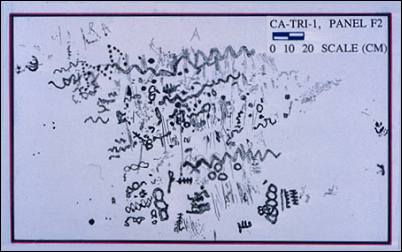 A complex panel of rock art designs was recorded at the site. The panel measures 253 cm wide and 150 cm from the ground level to the top. A tremendous complexity in motifs and figures is represented.

Occasionally Forestry and Parks get a chance to work together in recording significant archaeological discoveries. A recent opportunity occurred when an outstanding petroglyph site was rediscovered in 1993 by a state forester in a remote section of the Eel River Canyon in Trinity County, California. Subsequent archaeological survey of the area by the authors resulted in the identification of a major archaeological site containing three housepits, a midden deposit, an abundant scatter of chipped and ground stone artifacts, and two panels of petroglyphs which display elaborate, multiple, superimposed elements representing six discrete styles. Further research demonstrated the site had first been discovered in 1913 by a U. S. Government engineer, but its exact location remained obscure for over 80 years until the recent rediscovery. Its state designation is CA-TRI-1.

Site CA-TRI-1 is situated within the territory of the Eel River Wailaki, one of the three major tribelets of the Wailaki people who until the mid-nineteenth century occupied a series of villages along the upper drainage of the Eel River in northwestern California. Wailaki economy centered on salmon fishing during winter and hunting and foraging during other seasons. Incredibly, the Wailaki were able to hunt deer by running them down; this was accomplished by a relay team who alternated hunters chasing their prey until it could be dispatched by clubbing. Site CA-TRI-1 is a major Wailaki hamlet covering an area some 105 by 55 meters on a terrace immediately above the flood plain of the river, amongst a complex of large schist, serpentine and sandstone boulders. The housepits, ashy midden, charcoal and rich deposit of chipped and ground stone artifacts attest to the former presence of a significant Wailaki encampment. Distinguishing this site from the many other Late Prehistoric Eel River sites, and setting it apart, is the presence of two extensive rock art panels. 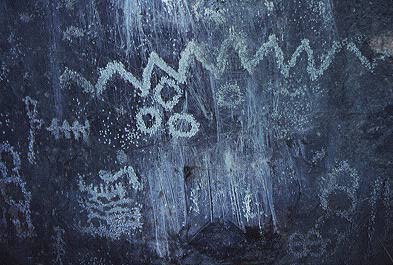 The largest and most elaborate rock art panel occurs on a vertical surface of a large schist boulder at the north end of the site. It is partially within a rockshelter but also extends outside it on a fully exposed vertical rock surface. This grouping contains an amalgamation of pecked abstract curvilinear figures overlain by a multitude of both shallow and deeply cut incised lines. Numerous examples of superimposition indicate that the two styles of incised line petroglyphs were carved into the rock after the pecked designs were created. The panel is dominated by numerous large, pecked, abstract curvilinear motifs formed by tightly clustered pecking, probably made by punch and hammerstone. These figures include long wavy lines, "zig-zags", circles, dots, punctuations, linked circles, linked diamonds, "tally mark" designs, deeply incised lines and other more abstract shapes. A second, moss-covered grouping of deeply abraded petroglyphs occur on the opposite side of the same boulder. These figures include two grooved circles, thirty-six cupules, and several deep linear grooves. Part of this panel was buried 30cm below present ground surface. 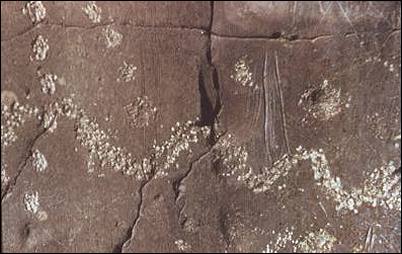 At least six different petroglyph styles are present at CA-TRI-1, possibly representing distinctive temporal periods. These separate styles can be identified by differences in method of creation, subject matter, repatination, and superpositioning. Evidence suggests these styles range in age from circa 500 BP to 2500 BP. The most recent style, consisting of deeply incised lines, is probably linked to female fertility rituals practiced by the Wailaki and their Pomoan neighbors to the south.

CA-TRI-1 is a remarkable site in nearly pristine condition. Its two petroglyph panels display multiple, distinctive styles with outstanding evidence of superimposition, this site presents unique opportunities to investigate the relative chronology of prehistoric rock art of northwestern California. Further studies may also contribute to our understanding of the Slakaiya tribelet of Athabaskan speaking Wailaki who inhabited this remote section of the Eel River.

Click on the images below for more details about Eel RIver Petroglyphs: