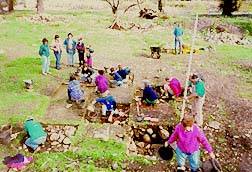 The park's intent is to reconstruct several of the buildings that lined Main Street during the gold rush era. Researchers were especially curious about the store of Stephen A. Wright. Wright's store was one of the first merchandising firms established in Coloma immediately after the discovery of gold. Its exact location, however, remains a mystery. Some have speculated that the store lied somewhere between the present site of Bekeart's gunshop and the Argonaut saloon. The goal of the archaeological team was first, to determine through the historical and archaeological record if this could have been the site of Wright's store and second, to gather as much data as possible about the buildings that definitely did exist on the site. These buildings included: the Weller hardware stores, the Shades saloon, the Hook & Ladder Company building, Zelner's drug store, the "brick" store of John L. Huntress and Dr. Taylor's offices. Information gained about these buildings would help to increase knowledge of Coloma s local history and the history of this peculiar era in California s history.

The investigation began in the archives with a detailed examination of property records, newspapers, historic maps and photographs. Armed with this information, archaeologists were able to reconstruct a mental image of Main Street as it looked one hundred and fifty years ago. During this phase of the project researchers discovered that given the lack of detailed maps or records, the exact location of Wright's store would be nearly impossible to determine. Archaeologists turned their attention instead to the stores that were known to have stood on this portion of Main Street during the gold rush.

Testing strategies were discussed and preliminary plans made prior to the start of excavation. However, once the actual fieldwork began, archaeologists quickly discovered that the written record did not tell the whole story. Instead of uncovering gold rush era building foundations, excavators revealed a late nineteenth century mining operation. Sometime in the 1890s, long after the 49ers had given up on their dreams of instant riches and returned home, a group of hopeful miners worked over the abandoned land in anticipation of finding a previously undiscovered vein of gold. They tore down the decaying buildings and dug up the land beneath them. Teams of men forced the dirt through long sluices tossing large cobbles behind them as they worked. Fifty years after the discovery of gold, Coloma still remained a popular spot for eager gold seekers.

The results of this late nineteenth century mining activity created a bewildering array of features for archaeologists to attempt to interpret. Stacked cobble walls created by the miners often mimicked building foundations. Only after clearing and excavation were archaeologists able to determine that these features were indeed the product of mining activity. On Lot 13, the discovery of numerous medicinal related artifacts allowed investigators to conclude that they had discovered the location of the 1850s era apothecary. Unfortunately, the mining of the late 1890s seemed to have destroyed the context of these materials. Instead of discovering objects in the place and condition in which they were originally abandoned, archaeologists recovered broken and scattered artifacts that had been displaced by the mining activity. However, the recovery of a large amount of relatively undisturbed Chinese artifacts may indicate the ethnicity of the miners and the location of their temporary living site. In the last few weeks of excavation, archaeologists uncovered several postholes in this lot that indicate the existence of a post-mining era structure which may yield clues as to the unique history of this portion of block nine. Despite the apparent absence of gold rush era features, investigators remain hopeful that excavations in the spring may reveal more detailed information about the history of this block and the people who occupied it.

Park officials and CSUS archaeologists have attempted to involve the public as often as possible in the archaeological excavation process. Park visitors were invited to observe the activities of the excavators and talk to crew members at our information table. Local schools and the news media were invited to visit the site and tours were provided by appointment to interested groups. Volunteers from the local community were invited to participate in the project either directly through supervised excavation or indirectly by donating their knowledge of historical events and people. Some of the descendants of pioneers were contacted to provide additional information on the area's history.  (Excavation conducted in 1996)