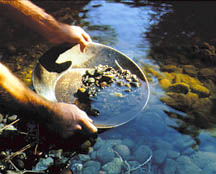 California's most famous gold rush dates to the morning of January 24, 1848, when James Marshall made his customary inspection of the sawmill he was building for John Sutter. During the previous night, Marshall had diverted water through the mill's tailrace to wash away loose dirt and gravel, and on that fateful day, he noticed some shining flecks of metal left behind by the running water. He picked them up and showed them to his crew, but while he was pretty sure that it was gold, the full significance of his discovery was truly impossible to imagine. He was still concerned about getting the mill finished.

Gold was both plentiful and - by happy geologic accident- easy to extract, making the gold-bearing gravels of California's rivers into what has been described as "the finest opportunity that, has ever been offered on any mining frontier." A contemporary newspaper put it slightly differently: "The whole country, from San Francisco to Los Angeles, and from the sea shore to the base of the Sierra Nevadas, resounds with the cry of 'gold, GOLD, GOLD!' while the field is left half planted, the house half built, and everything neglected but the manufacture of shovels and pickaxes."

Today, a few mines and the remains of several boom towns have been preserved in a variety of state parks. Most of them, including the Marshall Gold Discovery site, the fabulous Empire Mine, the historic town of Columbia, the rich gold deposits at Plumas Eureka, and the controversial hydraulic mining pits at Malakoff Diggins, are located in or near the Mother Lode region of the central Sierra Nevada foothills.

The riverfront embarcadero and commercial district of the Gold Rush preserved at Old Sacramento teemed with activity as would-be miners disembarked from riverboats and regrouped before setting out for the Mother Lode.  Outfitters and other merchants there thrived on the gold trade, portrayed in the re-created Huntington & Hopkins Hardware Store.  The mining boom that Captain John Sutter himself set in motion nearly destroyed his Nuevo Helvetia agricultural empire headquartered at Sutter’s Fort.  A portion of his Mexican land grant became the bustling Gold Rush boomtown of Sacramento.

While gold-seekers were pouring through Sacramento and into the Sierra, deposits of the precious metal were also discovered in the Klamath Mountains of northwest California.  Today, ruins of the historic town of Shasta and the Chinese temple at Weaverville Joss House State Historic Park recall the days of the Klamath gold rush. In combination, the Mother Lode and the Klamath gold fields produced the modern-day equivalent of more than $25 billion in gold before the turn of the century, with operations continuing at Empire Mine until as late as 1956.

Between the 1860s and the turn of the century, prospectors found gold in a number of locations in California. One of the Wests largest authentic ghost towns is Bodie in the eastern Sierra Nevada, now a state historic park that preserves the abandoned buildings of the rough-and-tumble mining town that sprang up in response to a gold strike in 1877.

In Southern California, three historic gold mining areas lie within the state parks. Park headquarters at Red Rock Canyon State Park is on the site of what was once an important community in a region that produced several million dollars in gold, primarily in the 1890s -including one 14-ounce nugget.

At Cuyamaca Rancho State Park, visitors can tour the remains of the Stonewall Mine, which produced $2 million worth of gold between 1870 and 1892.

At Picacho State Recreation Area on the lower Colorado River, visitors can view Picacho Mill, the last visible remnant of Picacho, a gold mining community that boasted a population of 2,500 in 1904.